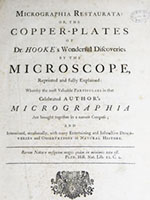 Micrographia restaurata: or, The copper-plates of Dr. Hooke's wonderful discoveries by the microscope, reprinted and fully explained...

Conservation treatment of Micrographia restaurata... was generously funded by Adopt-a-Book donor, Jane Lomax-Smith, in October 2020. Her valued contribution has ensured this important 18th century text will be available for future generations of researchers for many years to come. 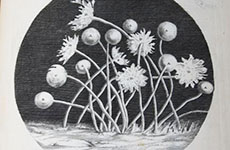 In 1665, a landmark publication by Dr Hooke, the Royal Society’s Curator of Experiments, took the world by storm.  For the first time, the invisible became visible through a set of 38 engravings, each depicting a subject as observed by the philosopher under his microscope.  Micrographia; or Some physiological descriptions of minute bodies made by magnifying glasses… was one of the most important scientific texts of its time.  So coveted was it, that by the early 1700s scarcely a copy could be found and when it was, a princely sum was paid.  The need for a more affordable alternative prompted the release of a second edition, Micrographia restaurata, in 1745. It comprised 33 magnificent plates, 30 of which had been reprinted from the original 1665 copper engravings.

Its author, Robert Hooke, was born in 1635 on the Isle of Wight.  He was home-schooled until 1648, when his father died, leaving the boy an inheritance that would secure his apprenticeship to London painter, Sir Peter Lely. He also reportedly took instruction in drawing from English miniaturist, Samuel Cowper.[1]  Hooke attended Westminster School, where he studied Latin, Greek and Hebrew, amongst other languages, and furthered his education at Christ Church, Oxford, where he took an interest in just about everything.  Musical training secured him the post of chorister, and a passion for building equipment and experimenting saw his appointment as assistant to the chemists Thomas Willis and Robert Boyle.[2]

At Oxford, Hooke came into contact with some of the finest natural philosophers of the time, so it is not surprising that he became a virtuoso, contributing significant findings to many scientific fields.  As Ben Waggoner observed, he invented the universal joint, the iris diaphragm, an early prototype of the respirator, the anchor escapement and the balance spring, which improved the accuracy of clocks.[3]  He discovered that the force needed to extend or compress a spring by some distance was proportional to that distance (an elasticity equation now known as Hooke’s Law), and he devised or improved multiple meteorological instruments, including the barometer.  It was his contribution to biology and paleontology, however, for which he became most famous.

In 1662, Hooke was appointed Curator of Experiments, albeit unpaid, at the Royal Society of London.  He had captured the attention of founding members with his scientific endeavours and now they wanted to see more.  Such was the range and quality of his experiments, that they awarded him a salaried position in 1664 – an appointment that saw him become the first professional research scientist, employed specifically to investigate the phenomena and principles of nature.[4]  He had made himself indispensable and thus earned a degree of freedom to determine his own experimental program. 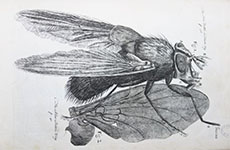 During these experiments Hooke used his compound microscope to bring to life his observations of nature.  Many of these observations found their way into Micrograhia; the book of engravings and commentaries that essentially initiated the field of microscopy.  It included illustrations of sponges, seeds, stones, wood, leaves, bird feathers, and insects, to name just a few, and his extraordinary talent for drawing, gained early in life, was evident in all of them.  The attention to detail in his “flea” and “louse” alone must surely have shocked readers who were seeing insects in this way for the very first time. His accompanying descriptions, though flamboyant, only added to the book’s appeal.  Underlying each was a respect and passion for the natural world, even for its most menacing of occupants.  The flea, for example, he noted “was adorn’d with a curiously polish’d suite of sable Armour, neatly jointed.”[5]

The book had so many important implications for various branches of science.  His description of observable colours in Muscovy glass initiated discussions around his two colour (blue and red) theory of light, and his observations of crystals lead to conversations about their form and the manner in which they arose from arrangements of tightly packed spherical particles.  Of fossils, he proposed a process in which once living substances became petrified, pathing the way for future research into fossils as a record of past life.  The observation for which he was most renowned, though, was that of cork.  On these minutely thin slices of cork, he elaborated on his description of ‘cells’, writing that they were “all perforated and porous, much like Honey-comb, but that the pores of it were not regular… these pours, or cells… were indeed the first microscopical pores I ever saw, and perhaps that were ever seen, for I had not met with any Writer or Person, that had made any mention of them before this…”[6]

The Library’s copy of Micrographia is the second edition. With all of its engraved plates intact, 30 of which have been meticulously reprinted from the original 1665 copper, the book is considered extremely rare.  Now carefully restored under the Adopt-a-Book program, its illustrations and descriptions continue to offer scholars a unique, early glimpse into the hidden world of natural wonders that Hooke was so keen to share.

Full cloth binding with tears along the board edges and loss at the delaminated corners. Soiling, staining and scuffing to front and back covers.  Headcaps weak and torn, and a small split at the tail of the front joint.  Text pages dusty, with some plates also heavily soiled with finger marks. Previous repairs using squares of paper adhered to the back of page tears beginning to fail. Engraved plates severely creased and in need of cleaning and resizing..

Micrographia restaurata: or, The copper-plates of Dr. Hooke's wonderful discoveries by the microscope, reprinted and fully explained: whereby the most valuable particulars in that celebrated author's Micrographia are brought together in a narrow compass; and intermixed occasionally, with many entertaining and instructive discoveries and observations in natural history ...

[5] Hooke, Robert, Micrographia, or some physiological descriptions of minute bodies made by magnifying glasses, with observations and inquiries thereupon. London: Printed by Jo. Martyn, and Ja. Allestry, printers to the Royal Society, 1665.