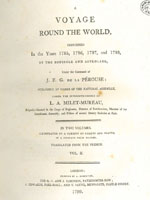 A voyage round the world, performed in the years 1785, 1786, 1787, and 1788, by the Boussole and Astrolabe, under the command of J. F. G. de la Pérouse: Published by order of the National Assembly, under the superintendence of L. A. Milet-Mureau, Brigadier-General of the Corps of Engineers, Director of Fortifications, Member of the Constituent Assembly, and Fellow of several literary societies at Paris. 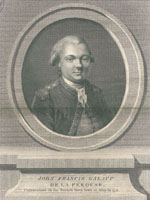 Jean-François de Galaup, comte de La Pérouse was born in France in 1741.  As a teenager he studied at a Jesuit College, before joining the French navy where he became a successful seaman and navigator.  Early in his career he participated in numerous supply expeditions and battles, one of which – the Battle of Quiberon Bay – saw his capture and brief imprisonment.  La Pérouse also fought against the Royal Navy off the American coast and victoriously led the frigate L'Astrée in the naval battle of Louisbourg.  When he defeated the British frigate Ariel in the West Indies he was promoted to Commodore, and in 1782 made a name for himself when he captured the Prince of Wales Fort and York Fort on the Hudson Bay coast, in the process allowing survivors to set sail for England in exchange for the release of French prisoners. 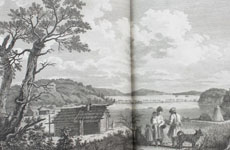 In 1783 King Louis XVI began to draft an itinerary for an expedition to the Pacific.  Its purpose was to complete the unfinished work of Captain Cook and to explore the passages in the Bering Sea to the west of Alaska.  For centuries it had remained a mystery to Europeans and La Pérouse was now charged with solving it.  He was to command two ships, La Boussole and L'Astrolabe, both of which set sail for Brazil on 1 August 1785.  After making it to Chile, he sailed on to the Sandwich Islands; to Alaska, where he explored the coast as far as California; to Monterey for refitting, and then across the Pacific where he visited Macao and Manila and where he discovered several uncharted islands.  On 10 April 1787 he set off to survey the territories and coasts north of Korea; sailed up the Gulf of Tartary, in the process naming multiple points on both its shores; arrived in Kamchatka to bring on-board more supplies, and dispatched one of his officers overland to Paris to report on his discoveries.  In December of that year natives of Tutuila, Samoa, suddenly attacked L’Astrolabe’s crew members who had sought water, killing twelve of them, including second in command, Paul Antoine Fleuriot de Langle.  La Pérouse never retaliated, simply sailing on through the Pacific to Norfolk Island and eventually Botany Bay.  He arrived there in January 1788 and established a camp on the northern shore (now named after him), where he remained for the next six weeks.  He then set sail on the 10th of March and was never seen or heard from again. 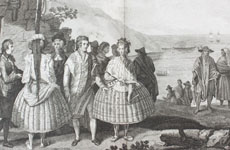 The French government sent admiral and navigator Joseph-Antoine Raymond Bruny D'Entrecasteaux on expedition to look for La Pérouse in 1791 but his efforts were in vain.  It was not until 1828, twenty-seven years later, that explorer Jules Dumont d'Urville could establish that the La Pérouse expedition was wrecked at Vanikoro, an island southeast of the Santa Cruz group, north of the New Hebrides.  In 1797 the records of La Pérouse’s voyage as far as Kamchatka were published in Paris in four volumes: Voyage De La Pérouse Autour du Monde.

A voyage round the world… (1798-99) is the English translation of this work.  Today the volumes, complete with exquisite engravings (all by the finest of European illustrators), still provide a wealth of scientific, cartographic and cultural information.  Both text and plates cover a remarkable range of subjects, including: people and their native dress, plants, insects, birds, sea urchins, vessels, monuments, charts, plans and much more…

Adapted from the La Pérouse entry in the Australian Dictionary of Biography by Leslie R. Marchant, originally published in vol. 2, 1967 and accessed online on 24 November 2017.

Substantial loss of paper covering from boards. Board corners and edges beginning to separate and front board starting to detach.  Similar loss of blue paper from spine with headcaps severely bumped.  Requires rebacking.

Front board detached and rear board starting. Numerous large strips of leather missing from covers. Significant loss of leather also to board corners and edges. Heavy binding which will require a full reback.

Japanese repair paper custom-dyed in a dusty pink to re-cover the missing sections on the front and rear boards. Board corners and edges consolidated with glue and also re-covered with new repair paper.  Paper along the joints lifted and new dusty blue cloth inserted underneath to create a new spine. Remainder of original spine re-adhered to new cloth. Inner hinges strengthened with blue cloth.

Board corners consolidated and re-covered with calfskin, sympathetic in colour to the original. Leather from covers lifted, spine lined with thick paper, and new leather inserted, creating a sturdy spine to which the remainder of the original could be re-adhered. Inner hinges reinforced with tan-coloured cloth. Some of the more obvious leather tears to the cover dyed to blend with the whole.