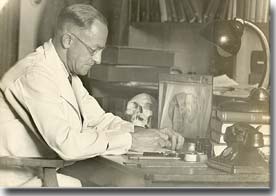 Andrew Arthur Abbie was born in Kent in England in 1905 and was educated at Sir Joseph Williamson’s Mathematical School at Rochester.  His family emigrated first to New Zealand and then to Sydney, where Abbie, after a year in an insurance office, undertook his medical degree at the University of Sydney.  He graduated in 1929 after a brilliant undergraduate career.  From 1929 to 1932 he was Resident Medical Officer at Prince Alfred Hospital in Sydney and from 1932 to 1934 worked with Sir Grafton Elliot Smith at University College London, completing his Ph.D. in 1934.  From 1936 to 1941 he was Senior Lecturer in Anatomy at the University of Sydney and, after war service as a chemical warfare physiologist, was appointed Elder Professor of Anatomy and Histology at the University of Adelaide, retiring from the Chair in 1970.  In Adelaide he was active as a member of the Board for Anthropological Research, as well as other anthropological and medical societies.  He undertook a number of research expeditions with the Board between 1951 and 1961 and published extensively on the physical anthropology of Aborginal Australians, in addition to his other special field of neuroanatomy.

In February 1999 the Library received an extensive collection of miscellaneous papers from Mrs A.A. Abbie.  It included printed and typescript/draft articles, talks, broadcasts and books by Abbie, together with photographs, drawings, diagrams and reprints of papers by others.  The papers appear to have been listed as received and are in no discernible order (see Part I below). There may be duplication both within this collection and within the listed papers of Part II.

Another extensive collection of papers, consisting of manuscript and typescript articles by Abbie and others, as well as newspaper cuttings of articles re Aboriginal Australians was also apparently given to the Institute of Aboriginal Affairs.  There is a listing of these in Part II, Series 2.  In 1977 Mrs Abbie donated additional material (relating to Sir Grafton Elliot Smith?) to the Royal Anthropological Institute of Great Britain and Ireland.

Series 11 to 13: Certificates, reports and sketches