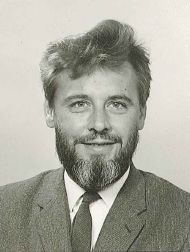 Leon Atkinson (1930-1985) obtained his B.A. (Hons.) at the University of Adelaide in 1959 and his Ph.D from Australian National University for a thesis on Australian defence policy. In 1964 he received a Ford Foundation grant for a study of India in the last years of the Raj, but took up an appointment at Adelaide as Lecturer in History in 1965, before completion of this work.

As a lecturer (Senior Lecturer from 1972) in the History Department, Dr. Atkinson taught in the specialist areas of literature and society and war and peace in Europe in the early 20th century (notably German imperialism and National Socialism) and was renowned for his exceptional teaching ability. He was also chief examiner in History for the Public Examinations Board and a member of its Modern History Subject Committee; co-authored the matriculation syllabus for Australian history; and was active in the History Teacher's Association, drafting a series of lectures for teachers of history for publication in 1975-76. Shortly before his death he was involved in writing and producing videos for undergraduate teaching at the University.

These papers were deposited with the University Archives in 1988 by Dr. Atkinson's son, Michael Atkinson. Some notes and working papers used to prepare lectures were not retained, and extensive copies (typescript and microfilm) of official records, gathered for Dr. Atkinson's project on India, were transferred to the Henderson Room for the use of research students in history and politics.

Series 5
Papers relating to participation in History Teachers Association Conference. 1975-76. 6cm.
(Correspondence, briefing and session papers, address at opening of 1975 Conference, and drafts of five lectures under the title "Politics of Upheaval" for proposed publication by the Association).

Series 9
Correspondence and draft script relating to involvement in writing and producing teaching videos, and possible secondment to the Advisory Centre for University Education. 1985 and undated. 2cm.

Series 10
Cuttings of reviews of G.L. Buxton's The Riverina and of reviews by Buxton of other local histories. 1968 and undated. 1 cm.

Series 11
Miscellaneous correspondence (letter received Sept. 1971 re possibility of a visiting fellowship at ANU, and copy of the letter November 1976 to Philip Satchell re responses to ABC programme on Remembrance Day featuring LDA on war). 1cm.