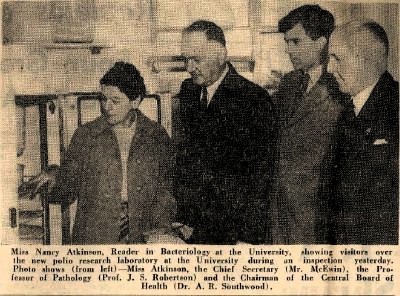 Nancy Atkinson obtained her Masters in Science at the University of Melbourne in 1932, having transferred from her initial field of chemistry to the relatively new field of scientific research, bacteriology.  She was appointed Lecturer in Bacteriology at the University of Adelaide in 1939 (Head of Department 1942) and was Reader-in-Charge, Department of Bacteriology from 1950-[1958].  She was unsuccessful in her application for the first Chair in Microbiology (1958) but she continued as Reader in the Department and in 1961 was given a personal Readership in Industrial Microbiology.  She was also appointed Bacteriologist at the Institute of Medical Veterinary Science in 1942, a position she held jointly with her University appointment until 1949. Atkinson established and directed the Salmonella Reference Laboratory at the University and discovered a new strain of salmonella, which she named Salmonella Adelaide. She was also the first person in the state to produce penicillin.

During her long career she was involved in research on salmonellas, initiating and directing the Salmonella Reference Laboratory and in the investigation of native plants and fungi with antibacterial properties potentially valuable in the treatment of typhoid and tuberculosis, contributing also to the Australia-wide Phytochemical Survey.  She lectured to students in science, agricultural science, medicine and dentistry and was involved in the establishment of courses in industrial (applied) microbiology.  Atkinson was instrumental in establishing the Australian Society for Microbiology, which developed from her original proposal in 1958 for an Australian Institute of Microbiology. 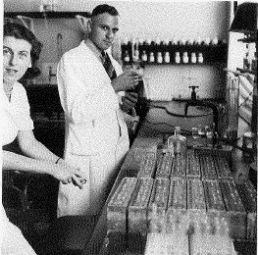 She also helped to establish the Australian Institute of Food Science and Technology (South Australian branch) and the Water and Waste Water Association. Outside of science, Nancy Atkinson took a keen interest in South Australian artists, as well as the wine industry, establishing the Chalk Hill winery in McLaren Vale with her husband.  She also wrote two art books (under her married name of Benko): Art and Artists of South Australia and The Art of David Boyd.

Nancy Atkinson was awarded the OBE in 1951 and received her Doctor of Science degree in 1957 for her work on antibiotics and salmonellas.

These papers were received by the Library in April 1999 from her son, Dr Jonathan Cook. Series 19: 'Studies in bacteriology and immunology' was transferred from The Walter & Eliza Hall Institute in June 2011.

Series 4: Application for the Chair of Microbiology at the University of Adelaide.
Drafts, related correspondence and supporting documentation (including 1st and 4th-10th IMVS annual reports). 1958-1959.  4 cm.

Series 5: Papers on the History of Microbiology at the University of Adelaide
Compiled initially in 1947 and revised as part of a broader study of microbiology teaching and research at Australian universities by Prof. Vic Skerman (University of Queensland) in 1973.  1947-1973.  4 cm.

Series 15: Phytochemical survey
Correspondence and notes, newsletters and publications of the Survey and of the 4th and 5th Australian Phytochemical Conference, 1955 and 1958.  1951-1959.  10 cm.

Series 19: Studies in bacteriology and immunology.
1933-1944.  3 cm.
Reprints and typescript papers by Atkinson, and collaborative papers for which Atkinson was primarily responsible, grouped in sections:

The end of the preface contains the statement: "The University of Adelaide has advised me not to present a thesis along with this collection of papers."

Biographical essay on Nancy Atkinson, written by Dr Emma McEwin and published in Australian Journal of Biography and History, no. 1, 2018, 19pp.