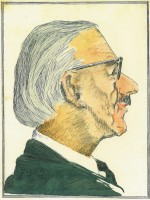 Born in Austria, Richard Barkeley (real surname Baumgarten) was teaching history at the WEA in London during WW2. He was the author of "The Empress Frederick" (1956) and "The Road to Mayerling: Life and Death of Crown Prince Rudolph of Austria" (1958).

Hardback copy of The Road to Mayerling

2 reproductions of illustrations of Richard Barkeley. 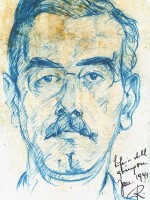 Folder 5: Manila folder unlabelled – some English and German correspondence and typescript and handwritten notes in German

Folder 6: Large cardboard folder labelled “Empress Frederick: Reviews and Letters” containing numerous news-cuttings from “The Times”; “Manchester Guardian”; “The Observer” and other mainly British Newspapers – in English plus Barkeley’s correspondence with his publisher Macmillan, including a letter to the Emperor Otto Bavaria (dated 11/4/1957) to whom a copy of the biography of The Empress Frederick was sent and a review by A.J.P. Taylor amongst others.