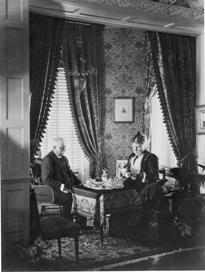 Robert Barr Smith (1824-1915) was born in Lochwinnoch, Renfrewshire, Scotland, and emigrated to Victoria in 1854. By 1855 he had relocated to Adelaide, South Australia, and became a partner in the business Elder & Co. In 1856 Robert Barr Smith married Thomas Elder's sister Joanna and by 1863 he and Thomas Elder were the only two partners in Elder Smith and Co., a highly successful business that included mining, pastoral leases and steamships in its portfolio.

Thomas Elder (1818-1897) emigrated from Scotland to South Australia in 1854 to jointly manage with his brother George the family firm founded in1840 by their elder brother Alexander.

Robert Barr Smith and Sir Thomas Elder were renowned for their philanthropy, donating generous sums to a wide array of organisations. The University of Adelaide was particularly well-served, receiving amongst other donations £9000 toward the establishment of its library. His son, Thomas Elder Barr Smith (1863-1941), together with other family members, donated £11,000 towards the endowment of the Barr Smith Library. An additional donation of £20,000 in 1928 was made to enable the erection of the new library building which is now known as the Barr Smith Reading Room.

Sir Thomas Elder's initial gift of £20,000 in 1874 was used to endow Chairs of Mathematics and Natural Science, while further gift in 1883 established the Elder Professorship of Music. The University of Adelaide was the largest beneficiary of Elder's estate, enabling the building of Elder Hall and the establishment of the Elder Conservatorium of Music .

Upholding the tradition, Christine MacGregor, Robert Barr Smith’s granddaughter, bequeathed over four and a half thousand books to the Barr Smith Library, around five hundred of which are now housed in Rare Books & Special Collections.

This collection includes photographs, family correspondence, and letters relating to the donation of money for the construction of the Reading Room. Miscellaneous items include a handwritten copy of a short story written by [Marjorie] Erlistoun Mitchell, the daughter of Robert and Joanna.

Robert Barr Smith’s Letterbooks and Commonplace books (labelled 0, I and III), and the silver trowel used by Mary Isabel Barr Smith to lay the foundation stone of The Barr Smith Library were donated to the Library by Tom Elder in June 2012.

Commonplace book, labelled II on the cover, was acquired with Friends of the Library assistance from Michael Treloar Antiquarian Booksellers in 2017.

1.1 Group of 10 letters from Mrs Joanna Hawker to her niece, Joanna Thomson (later Simpson), affectionately written as being from a cat. With an unsigned accompanying note from Mr. Ira Raymond, University of Adelaide Librarian, 1964-1982

1.4 Four line fragment of a letter from Robert Barr Smith which mentions Erlistoun and her two children, Mark and Nan (Joanna Thomson), with an explanatory note by Ira Raymond

1.5 Carbon copy of a typescript letter from Ira Raymond to Mrs. J. R. Thomson acknowledging receipt of the above items, 9th March, 1982

2.7 Robert Barr Smith in his study

'Unto the third and fourth generation', 36 p. (holograph manuscript of a story by [Marjorie] Erlistoun Mitchell (nee Barr Smith), with an accompanying note from Mr. Ira Raymond)

Letter book 10 March 1907 to 20 May 1915.
Contains copies and typewritten copies of letters. Includes

Other letterbooks are held by the State Library of SA

Commonplace books labelled 0, I and III were donated to the Library by Tom Elder in June 2012. The previously missing Commonplace book, labelled II on its cover, was acquired with Friends of the Library assistance from Michael Treloar Antiquarian Booksellers in 2017.

Labelled ‘III’ on cover.
Comprised of an index to books 1-2, with newspaper and magazine clippings (texts and portraits/photographs) and other addenda and interesting facts, arranged alphabetically by subject eg.

Engraved silver presentation trowel with wood handle, presented to Mary Isabel Barr Smith 29/9/1930 on the occasion of the laying of the foundation stone of the Barr Smith Library of the University of Adelaide, made in Birmingham, England, ca 1903, retailed by F. Basse of Adelaide.
In leather case 37.7 x 13.7 cm x 7.3 cm, lined with royal blue velvet, and inside the lid with royal blue silk with worn gold stamp ‘F. Basse, Adelaide’ with two small brass hinges and clasps.