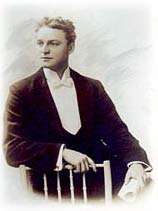 Henry Brose graduated from the University of Adelaide in 1909 with a B.Sc. and, after a period teaching French at Prince Alfred College, was awarded a Rhodes Scholarship in 1913. Brose became interested in the Theory of Relativity after meeting Einstein while interned as a civilian prisoner in Germany between 1914 and 1919. Awarded a Ph.D. in Mathematics at Oxford in 1925, Brose went on to hold a number of academic positions including Lecturer in Physics at the University of Sydney 1926 and Professor of Physics at University College Nottingham 1931-1936. When Einstein visited University College Nottingham in 1930 and 1931, Brose acted as his interpreter. Between 1920 and 1936 he translated a number of German physics texts into English. Later Brose worked in cancer research, holding positions as a physicist, a pathologist and a biochemist, and in Sydney from 1939 to 1965. Brose underwent a second period of internment in NSW and Victoria between 1940 and 1943.

In August 1998 the personal papers of Henry Brose were transferred to the Australian Science Archives Project by John Jenkin, who had been given the records by Brose's family on the condition that he find a good home for them after completing his biographical study.

The collection was transferred to the Barr Smith Library at the University of Adelaide in 2003.

The records cover Brose's life from his time as a student at the University of Adelaide to his later career in Sydney. There are also records of Brose's wife Jean, née Robertson, who was an actress.

The papers include additional research material collected by John Jenkin, honorary associate of the Philosophy Program at La Trobe University, who produced the Brose entry in the Australian Dictionary of Biography as well as an article in Historical Records of Australian Science.

Additional Brose reprints, ephemera and manuscript items have been catalogued as separate collections held in the University Collection in Special Collections:
[Offprints of journals and ephemera], 1930-1938
On measurements of the molecular cross section of gases (other than the inert gases) with respect to slow electrons [manuscript]: Thesis for D.Sc. degree 1931.

Series 4 World War I and Internment