A graduate of Aberdeen University in Scotland, Jennifer M.T. Carter is an independent researcher and writer. Her historical works include Painting the Islands Vermilion: Archibald Watson and the brig Carl, Eyes to the Future: Sketches of Australia and her neighbours in the 1870s, and Burra 1845-1851: A Directory of Early Folk. Carter also writes historical novels under the pseudonym of Mary Talbot Cross. 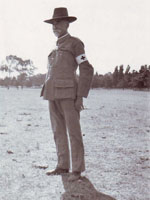 Archibald Watson was born in1849 at Tarcutta, New South Wales, the eldest son of Sydney Grandison Watson, a wealthy Victorian pastoralist of Scots-Indian descent, and his wife Isabella. Educated in Sydney and at Scotch College, Melbourne, Archibald excelled in scripture and was a champion light-weight boxer.

Acting as his father's agent, he became involved in blackbirding (the importing of indentured labour) aboard ‘The Carl’ on her 1871-72 venture in the Solomon Islands. On returning to Levuka, Watson was arrested and charged with piracy but was later discharged from his bail on entering into his own recognizance. The captain Joseph Armstrong was later sentenced to death for murder and atrocities committed during her previous voyage.

In 1873 he travelled to England and Germany where he studied medicine at the Georg-August Universität of Göttingen (M.D., 1878) and the Université de Paris (M.D., 1880). In England he obtained the licentiate of the Society of Apothecaries, London, and became a member and fellow of the Royal College of Surgeons. He also studied surgery under Joseph Lister at Charing Cross Hospital Medical School.

Watson was appointed Elder Professor of Anatomy at the University of Adelaide in 1885, and served as lecturer in pathological anatomy from 1887 to 1903 and lecturer in operative surgery from 1887 to 1919. He was an inspiring teacher, but also prone to autocratic and at times idiosyncratic behaviour. In 1895 he became involved in the controversial dispute involving Royal Adelaide Hospital staff.

Watson kept daily records of his patients and operations he witnessed, including observations made in the Unites States, China, South America, Japan, Russia and New Zealand, and during service with the Natal Field Force in the South African War and the first World War in Egypt and Greece. His notebooks have been preserved in the archives of the Royal Australasian College of Surgeons, Melbourne.

An erratic and eccentric genius, Watson lived an unconventional life and travelled widely. Watson retired in 1919 and lived his last years on Thursday Island, studying the Aborigines and collecting marine specimens.

Adapted from the Australian Dictionary of Biography entry by Ronald Elmslie and Susan Nance, and The Wakefield companion to South Australian history.

These papers, as arranged and listed, were donated to the Library by Jennifer Carter in March 2015. A few additional items donated by Mrs W.R. Angus in 2015 have been added to these papers.

Painting the Islands Vermilion: Archibald Watson and the Brig Carl (Melbourne University Press, 1999) and Eyes to the Future: Sketches of Australia and her Neighbours in the 1870s (National Library of Australia, 2000) have been catalogued separately for the Rare Books Collection.

Folder 1
Material re the Professor’s grandfather, General Archibald Watson (1779–1855), of the Honourable East India Company’s Bengal Service:
- Details and photocopy of his portrait held by the State Library of New South Wales
- Photocopy of Archibald Watson’s service record from V.C.P Hodson, List of the Officers of the Bengal Army, 1758–1834
- Photocopies of the service records of Watson’s sons-in-law and cousin, also from Hodson’s List
- Carter’s notes on the Watson connection with the Maharajas of Patiala
- Visit of the late Eva and Gordon of Aberdeen, Scotland to ‘Abbeythune’, the retirement home in Scotland of General Watson: written account and photographs taken in August 1997; some Watson/Scott history
- Correspondence with the British Library re Will of General Watson
- Inventory of Blackmore Family Papers at the State Library of New South Wales (items concerning the Watson Family)
- Correspondence between Carter and Mrs Maxine Horsfall, great-niece of Professor Archibald Watson (also some family photographs) MAY BE CONSULTED AND COPIED BUT NOT TO BE PUBLISHED WITHOUT THE PERMISSION OF THE HORSFALL FAMILY

Folder 2B
Sydney Grandison Watson (1816–1891) continued: ‘The King of the Upper Murray’:
- Landholdings in the Upper Murray district of Victoria; articles and chapters on the area; maps
- Items on ‘Tintaldra’ and photocopies of homestead diary
(NB. Professor Watson inherited what remained of the family land from his father, mainly ‘Walwa’.)
- Family trees (from the archives of the Royal Australasian College of Surgeons)

Folder 2C
Sydney Grandison Watson (1816–1891) continued:
- ‘The Pioneering Watson’, The Australasian, 12–18 January 1918
- ‘A Tour to the South: The Billabong and the Upper Murray’, Town and Country Journal, 6 April 1872
- Sydney Grandison Watson’s home in the Melbourne suburb of Collingwood
- Copy of marriage certificate to second wife, Constance Armstrong (into whose family Helen Mitchell, the later Dame Nellie Melba married)
- Sydney Grandison Watson and Spiritualism: Carter’s notes on his Spiritual Communications; photocopies and fiches from the State Library of Victoria

Folder 5
Professor Archibald Watson (1849–1940): Articles about him and references in print

Folder 8B
British Parliamentary papers: published reports and correspondence re the Carl and ‘blackbirding’

Folder 9
Papers by Professor Watson and list of his Donations to the South Australian Museum
Professor Watson’s Diaries: transcripts, notes, and photocopies
Request forms for photocopies of material in the National Library of Australia’s Marston Papers, etc.