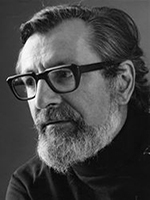 Tristram Ogilvie Cary was born in Oxford on 14 may 1925, the third child of Joyce Cary, the novelist, and Gertrude Margaret Cary (nee Ogilvie).

These scores were transferred from the Music Library in 2017. Other works by Cary have been catalogued separately. He was educated at Dragon School in Oxford and Westminster School in London where he was a King’s Scholar. He was awarded a B.A. from Oxford and studied composition, piano, horn, viola and conducting at Trinity School of Music in London. His education was interrupted by service in the Royal Navy from 1943 to 1946, specialising in radar and receiveing training in electronics. In 1949, while a student, he began experimenting with music concrete on primitive disc equipment.

From 1951 to 1954 Cary was starting a family, writing music, teaching and working pat-time in a gramophone shop. From 1954 he was gradually able to support himself by score commissions, and gave up most of his teaching and his part-time job. Since then Cary has composed a large variety of concert works and scores for theatre, radio, film, TV and public exhibitions.

Cary founded the electronic music studio at the Royal College of Music in 1967, and also designed and built his own electronic music facility, one of the longest established private studios in the world. He brought his studio equipment to Australia, where most of it was incorporated into the teaching studio at the University of Adelaide. He was also the founder director of EMS (London) Ltd., and co-designer of the VCS3 (Putney) Synthesiser and other EMS products.

In 1986 Cary left the University of Adelaide to private employment and established Tristram Cary Creative Music Services, where he continued to work on new commissions up until his death on April 24 2008 at the age of 82.

Cary is widely regarded as the father of British electronic music. Among many other achievements Cary composed music for Doctor Who, the films The ladykillers (1955), Quatermass and the Pit (1967) and Blood from the Mummy's Tomb (1970), alongside more conventional scores for Jane Eyre (1963) and Madame Bovary (1964). He also composed music for the British pavilion at Expo '67 in Montreal.

The following scores were transferred from the Elder Music Library Collection in 2017.

The rhyme of the flying bomb / poem by Mervyn Peake; music by Tristram Cary.
Words only.
16 p. (processed)

1 cassette tape containing "Contours and Densities at First Hills" by Tristam Cary, followed by a radio interview about the piece and "The Rhyme of the Flying Bomb" by Alan Hodgson, Barbara West and Tristam Cary (text by Merryn Peake)