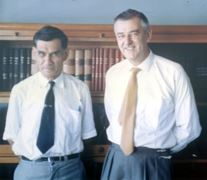 Thomson Reid Cowell, born 25 April 1920 in Peel, Isle of Man, entered Cambridge University in 1939 to study Economics but after the interruption of the war, joined the British Colonial Service as a cadet and was posted to the remote Gilbert and Ellice Islands Colony (now the independent nations of Kiribati and Tuvalu).  With the evacuation of colonial administrators from the Gilbert Islands after the Japanese entry into the Pacific he saw service initially on Fiji, with subsequent postings to the Gilbert and Ellice Islands, the Solomon Islands and the New Hebrides and as Consul for Tahiti and Commissioner for Pitcairn, as well as further service at headquarters in Suva.  From 1958 to 1966 he served as Commissioner in the South Pacific Commission (SPC) and subsequently as an Assistant Registrar at the Australian National University and Executive Officer of the Australian-Asian Universities Cooperation Scheme.

While on leave in Cambridge in 1947, Cowell prepared a Gilbertese grammar (published in 1951 as The structure of Gilbertese and issued in a revised edition in 1964 as Simplified Gilbertese grammar).  At the SPC he compiled Pacific compendium: statistical and general information on the Pacific Islands associated with the South Pacific Commission and upon his official retirement in 1980, undertook the translations for a number of publications edited by Harry Maude relating to the Gilbert Islands.  These included Traditional stories from the Northern Gilberts, Tungaru traditions: writings on the atoll culture of the Gilbert Islands by Arthur Grimble and An anthology of Gilbertese oral tradition: from the Grimble papers and other collections.

Cowell died in Canberra in January 1992, survived by his wife Margaret, whom he had married while on leave in 1947 and who shared the rest of his service life in the Pacific with him.

These papers were donated by Mrs Margaret Cowell through Alaric Maude in July 2002.

3. Extracts from the records of the local government of Pitcairn Island for 1898 to 1948, compiled and edited by Reid Cowell December 1966.  1v. [originals in the Central Archives of Fiji and the Western Pacific]

4. Annotated typescript of Traditional stories from the Northern Gilberts, collected and written by Ten Tiroba, translated by Cowell, with correspondence between Cowell, Harry Maude and the Institute of Pacific Studies regarding publication July 1986-January 1991.  1 folder

5. Translations of the Arthur Grimble papers, rough drafts, together with a review of the published version, Tungaru Traditions by Barrie MacDonald, as published in the Canberra Times 31 March 1990.  1 folder

6. Synopses of Books A-Q of the [May] Pateman papers, final drafts, undated.  1 folder

7. 'A Memorandum on the South Pacific Commission' - review by Cowell of the Commission, April 1961, with covering letter to the Governor of Fiji.
(2 copies, one annotated)

8. Letter to the Governor 18 May 1965 regarding constitutional reform of the Commission and his 'A plan for partnership' July 1965.

Published papers and reviews by Cowell

9. 'University of the South Pacific', Journal of Pacific History 1967/2; reviews of The changing Pacific, Migration, myth and magic and Of islands and men; summary of 'Fee abolition: an appraisal' by H.G. Brennan, AVCC March 1972 [prepared by Cowell]  5 items

10. List of personal papers left in the Central Archives of Fiji and the Western Pacific 'on permanent loan' by Cowell, December 1966; letter from the FCO February 1969 regarding their decision not to publish Cowell's Pitcairn Island and South Pacific Commission reports; correspondence with the University of the South Pacific August 1991 regarding Cowell's proposed gift of runs of the journals Encounter, Journal of Pacific History and Pambu; manuscript and published version of article by Margaret Cowell on 'Life on today's Pitcairn', published in Pacific Islands Monthly December 1965.  5 items.

11. 'Pandemonia, or a Franco-British Fantasy (with the humblest apologies to Sir William Gilbert and Sir Arthur Sullivan) First presented at the Vanilla Ice-rink on 20th October 1956' [typescript; {3} 50 leaves] Harry Maude described this as 'a farce written by Reid Cowell on the Anglo-French administration of the New Hebrides, believed to be the only copy in existence today and I feel should be preserved as an astonishingly good play which portrays to perfection the ridiculous nature of the Condominium Government.' Transferred from the Maude Papers MSS 0003 Series K.