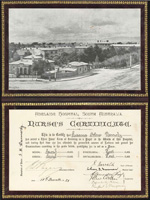 Susanna Helena Darmody was born on 6th November 1894 at Bungaree, Clare, to parents John Gerald and Maria Helena (Stalley) Darmody. She completed her Nurse’s certificate on the 15th December, 1921 from the Adelaide Hospital, South Australia.

In 1928 she travelled overseas with another nurse, Elizabeth B. Clark from Strathalbyn, landing in California on 16th March 1928 on the ship ‘Tahiti’ and travelling back to Adelaide from London on the ‘Oronsay’ on 27 October 1928.

She worked as a trained nurse at the Port Adelaide Casualty Hospital for ten years from 1929-1939 and for many years at the Peterborough Hospital. She was still living in Port Adelaide in 1939. The same year she married Edward/Edred Rowe Wreford at Paddington, New South Wales. In 1943 they were living at 342 Moore Park Road, Paddington. Their occupations are given as chairman and home duties. Susanna’s husband died in 1951.

She was also a Fellow of the British College of Nurses and a life member of the Royal British Nurses’ Association.

Susanna Helena Wreford died 5th June 1986 in Felixstow, South Australia. She was 91 at the time of her death. There is a cremation memorial for her at the Rose Garden Memorial site, Enfield Memorial Park, South Australia.

The collection was donated by Robert Franchini in 2015. Robert’s wife is related to Susanna Darmody. 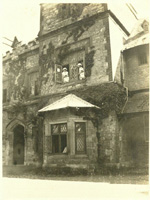 A collection of pins and badges belonging to Susanna Darmody from various clubs and institutions, such as: “To the Women of Australia”, “Issued by Dept. of Defence. To Women of Australia. For Duty Done.”, “Australian Red Cross Society. South Aust. Division”, “23rd BDE AIF”, “Motor Cycle Club of S.A.”, “For King & Empires Australia’s Sons”, “Australian Commonwealth Military Forces”.