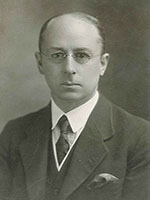 Llewellin Davey was born in Knightsbridge S.A. in 1889. He was educated initially at East Adelaide school and then from 1899 to 1906 at Prince Alfred College. He continued his education at the University of Adelaide (studying under William Bragg), graduating in 1913, and then worked at the Royal Adelaide Hospital for a year as House Surgeon.

In 1929-1930 he did post-graduate study in Sydney, London, Edinburgh, Vienna and Stockholm.

He married Doris Peacock at Kent Town Methodist Church in January 1915 and they moved to Laura where he was a ‘horse and buggy doctor’ from 1915 until 1921. On returning to St Peters in Adelaide, he worked in general practice for a further 23 years. For 17 years he was also Honorary Consulting Obstetrician at the Queen Victoria Hospital. He continued as a specialist obstetrician and gynaecologist for over 20 years.

Dr Davey was on the Board of the Home for Incurables (later Julia Farr Centre) for 47 years where a ward was named after him. He also served on the Boards of Methodist Ladies College, Wesley College and the Memorial Hospital; served as a council member of the Australian Medical Association, Prince Alfred College (also as Treasurer and School Doctor for 16 years) and the Flying Doctor Service. He was also Mayor of St Peters and President of the Medical Benevolent Association of South Australia. In 1986 he was presented with the Advance Australia Award and recognised on the Honours List of South Australian Philanthropic Citizens. In 1989 he was recognised as the oldest gynaecologist in the British Empire. Dr Davey died in 1991 at the age of 102.

These papers and artefacts were donated by Dr Davey’s daughter, Jean Lang, in April 2017.