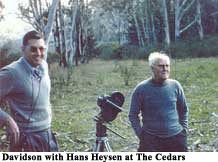 Ian Davidson was influenced at an early age by films seen in Adelaide in the late 1940s - William Wyler’s The Best years of our lives, Olivier’s Hamlet, The Third man and Kazan’s Boomerang - and by the writings of Jean Cocteau, Eisenstein, the Greek dramatists and philosophers and modern authors like William Faulkner and James Joyce.  In the 1950s he was further influenced by the work of dramatists (particularly Lorca) seen in  a range of ‘visionary’ productions in Adelaide and expanded his literary horizons by explorations in Mary Martin’s bookshop, which under Max Harris was a gathering place for those exploring modernism in art and literature.  In 1955 he met the painter and multi-media experimental artist Stan Ostoja-Kotkowski and soon after Wlad and Ludwik Dutkiewicz who founded the Arts Studio Players, and developed professional and personal  associations with them that were to involve him 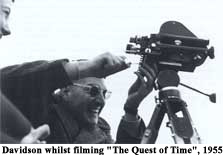 more directly in the artistic life  of Adelaide.  He began making films with Ostoja-Kotkowski in 1956 and collaborated with Ludwik Dutkiewicz  in 1964 to make Transfiguration, which won the AFI award for photography, and again in 1968 on Time in Summer, for which Richard Meale composed the music track.  In later years Davidson moved away from direct involvement in film-making and concentrated on photography, combining it also with his interest in literature to produce two privately published books of poetry and photographs.

These papers were presented by Ian Davidson in January 2000, with additions being made in June 2000.  Ian Davidson was working on a personal account of contemporary art in South Australia in the 1950s before his death in September 2000.  Additional biographical details are contained in some notes compiled by him in June 2000 (Series 7) and in the article on experimental film in South Australia published in Cantrill’s filmnotes nos.81-82, June 1996 (Series 8), and in Art, theatre and photography, his account of Stan Ostoja-Kotkowski.

1.  Film Deserted landscape
Video copies (2000)1, flyers and Agreement between Adelaide WEA Film Society and Arkaba Films P/L, 1966, photographs of Yvonne Louise Karalundi2 (featured in the film) and other stills from the film,  and statement by Ian Davidson regarding the history of the film and the persons and locations connected with it, February 2000.

[Material for this film, on the subject of the life of part-aboriginal people, was shot by the WEA Film Society in 1959 with the co-operation of various South Australian Aboriginal welfare organisations, with Ian Davidson as photographer and editor.  It was subsequently made into a completed film, with commentary written by Nancy Cato, by Arkaba Films in 1966.  These preservation and screening video copies were made with Ian Davidson’s authorisation in January 2000]
see also Series 7 and 8

6.  Note by Davidson on the film L’ eternal retour (1943), dir. Jean Delannoy, script by Jean Cocteau, and its impact on him when seen in Adelaide in 195?  2 p.
[Cocteau’s 1947 book about the film and also his Cart blanches and La belle et la bête were also presented to the Library by Ian Davidson and are held in the Rare Book collection]

7.  ‘Influences on my life’ - autobiographical notes compiled June 2000, including much on books and films.  8 p.

8.  Cantrill’s Filmnotes nos. 81-82, June 1996, containing article on Experimental film in Adelaide in the 50s and 60s, with much information supplied by Davidson.

Ian Davidson also donated in June 2000 two scrapbooks compiled by Gunta Zvaigzne on the John Bishop era of the Elder Conservatorium.  As these form the appendices to an essay submitted by Ms Zvaigzne as a B.Mus. student (Music in Education), and the essay itself is held in the papers of Malcolm Fox, then the course instructor, the scrapbooks have been added to that collection [SR 780.7299423 F793p Series 1 item 56].  The scrapbooks indicate the contribution of Stanislaus Ostoja-Kotkowski as set designer to many of the operas performed by the Conservatorium during this period.

__________________________________
1 The original reel film was returned to Mr. Davidson after copies were made. Other copies are held at the National Sound and Film Archives in Canberra and the Mortlock Library.
2 See also Series 3.
3 The Art Studio Players were established in 1959, with Wladyslaw Dutkiewicz as director and producer; Ian Davidson was stage manager for The Lower depths.

These papers were presented by Ian Davidson in January 2000, with additions being made in June 2000.