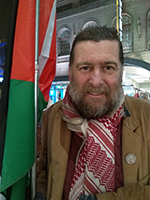 Dr David Faber was born on the 15th October 1959 to a teenage mother in a West Hobert Salvation Army Hostel. Adopted out due to Grand-parental disapproval, he was raised by a Socialist shopkeeper, from whom he imbibed a very early interest in history and politics. He was educated at Somerset Primary School, Burnie High School and Hellyer Matriculation College. In 1975 and 1976 David was 3rd Speaker in the Tasmanian Schools Debating Team. He was the only State School student in the team. In 1976 he won the Rostrum `Youth Speaks for Australia’ State title with a philippic against Governor General Sir John Kerr, and was placed 3rd in the national final.  In year 11, he matriculated in historical and literary studies and internally migrated to Adelaide in 1977. He returned to Burnie to train as a Registered Nursing Student, then, having qualified for entry to ANU, enrolled in the Arts Faculty of the University of Adelaide in 1980. Majoring in History, Philosophy and Politics, he was offered Honours in each of his Majors. Consigning a poor Honours due to ill health, he emigrated to Italy in May 1985, where he conducted historical research into the early life and times of Francesco Giovanni Fantin, the Anarchist Anti-fascist martyr assassinated at Loveday Internment Group Compound 14A on the 16th November 1942. He also became involved in the Partito Comunista Italiano as a minor Branch official in the town of Cernusco sul Naviglio in the Province of Milan. While in Italy he published in Italian a paper on sources available internationally regarding the detention in Australia of Italian POWs and civilian internees during WWII. Back in Adelaide he commenced post-graduate study on the life and times of Fantin, consigning a 2008 thesis on the subject. He is currently, among other projects, editing his thesis for publication under the working title An Anarchist Life: FG Fantin 1901-42. David is politically and culturally active in a number of associations. He practices as a labour historian, specializing in study of Italian political migration to Australia in the Fascist era, embracing an interest in oral history, archival research and the history of ideas.

These papers concern the political police dossier of an Anarchist precursor and envoy in Vicenza Province, where Fantin was raised, namely Sante Barbieri. Barbieri was feared by the Italian Direzione Generale della Pubblica Sicurezza to have returned to his homeland in 1905 from the United States` textile milling districts of New England to emulate in respect of the young King Vittorio Emmanuele II the regicide of Umberto Primo a few years before by the migrant textile worker and former Anarchist political prisoner Gaetano Bresci. The dossier is a monument to Italian political surveillance and interesting testimony to Anarchist political doctrine. The file is analysed in an extensive research note, 'Labour Migration and Regicide in early 'Twentieth Century Vicenza Province: The Political Peregrinations of Sante Barbieri July-October 1905', published in Flinders University Languages Group On-line Review in December 2017.

The papers have been filed in the original order in which they were received. (5 cm)