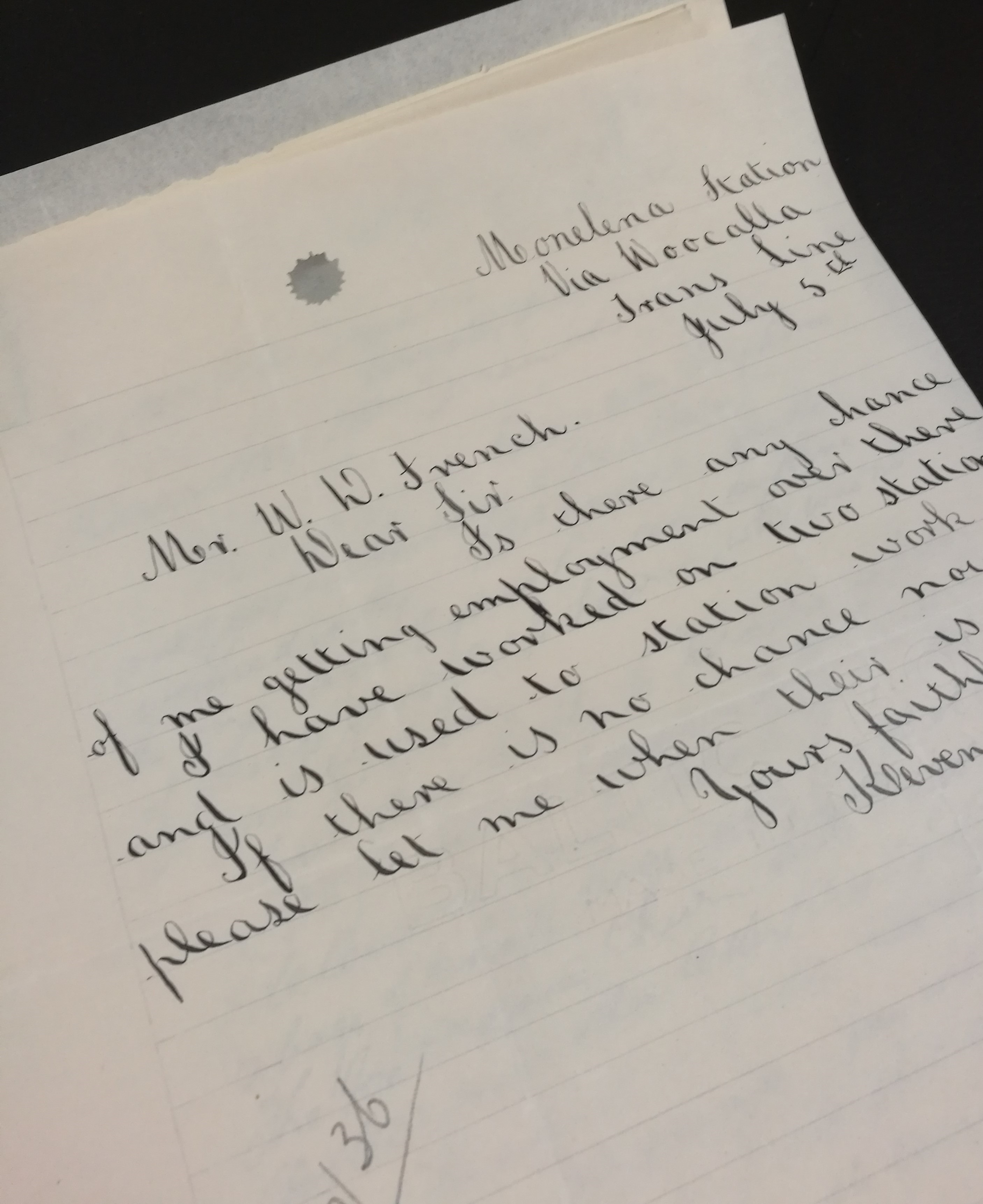 Pernatty Station is located 136 km north of Pt Augusta on the western edge of Lake Torrens, occupying a total of 2284 square kilometres of the traditional lands of the Kokotha people. The name is taken from Pernatty Creek, named by the explorer Charles Swindon after the Aboriginal name for the local waterhole.

The Old Pernatty area of the station was originally leased in 1868 by James Bowman and was one of the first in the area to be stocked with sheep. It was sold to William Coombe of Partacoona Station in 1896. The station experienced severe drought, and the 15 year old Walter David French, who had been sent to Pernatty to do contract work, stayed to manage the 28,000 sheep which dwindled down to only 700. Walter met and fell in love with Agnes Greenfield of South Gap Station and they married in 1903.

Her father, William Greenfield, bought Pernatty from Coombe in 1906, along with some additional blocks. William Greenfield originally managed South Gap Station, until he and his brother George went into partnership and bought the South Gap lease in 1885. After a falling out, the partnership was dissolved in 1906, with William owning South Gap, Parakylia, Roxby Downs and the newly purchased Pernatty Station. Walter and Agnes moved to Old Pernatty to look after sheep and the infrastructure.

George Greenfield and his family lived at Purple Downs Station, and also owned Billa Kallina, Andamooka and Bosworth Stations. William died in 1922, and his estate was put into trust until the death of George in 1926, when the beneficiaries could take charge of their properties and Walter and Agnes French became owners of Pernatty Station. Walter and Agnes moved from Old Pernatty to Acacia Creek where they had their home built in time to move in by Christmas 1927, with their staff and children, five sons and one daughter.

Pernatty subsequently grew with the purchase of Glen Verne and Corraberra Stations in 1932 (with the eldest son Laurie in charge), the southern end of Yeltacowie and Mount Gunson stations in 1936 and 1938, Mundallio Station in 1948 (managed by youngest son Jack), and Corunna Station at Iron Knob (run by son Graham), under the ownership of the Pernatty Pastoral Company.

The increased size of the property ensured enough sheep or cattle could be pastured to be economically viable and survive the regular dry conditions. Much time, money and labour was spent on the construction of wells and dams to waterproof the property. The wool clip was the main source of income, along with the sale of cattle and skins. During the prosperous times, the properties employed over a hundred people to shear and manage the stock and in domestic work.

Walter and Agnes retired to Port Augusta in late 1957 while their third child Walty, became manager of Pernatty. After both parents died, the property passed on to Walty and his son Colin, in 1961. Walty and his wife Mildred moved into his parents’ homestead, while Colin and his wife Ina, and daughter Beth, moved into his parent’s house 100 yards away. Colin’s son, Leslie, then moved into Pernatty after the death of his mother, Ina, in 1990. Walty died in 1999 of cancer which left Pernatty to Colin and Leslie.

The station experience difficulties due to the decreasing price of wool and extended drought. In 2010 Pernatty was sold to Col Greenfield of Billa Kalina, and changed from Merino sheep to Dorpa, a meat only breed which shed their wool and didn’t need shearing.

The Pernatty family and station papers were donated to the University of Adelaide Library in 2016 by Elizabeth Montgomery (Beth) French, the daughter of Colin French. The story of the French family and extracts from the station diaries are available from her book Pernatty Halcyon Days and Difficult Times

The papers contain personal correspondence and memorabilia of the French family and detailed financial records of Pernatty Station in regard to stock, employees, dams and wells, infrastructure and supplies. The daily entries of the station diaries from 1927 to 1963 provide important records of daily life on the land, family and social activities, visitors and workers at station (including Aboriginal workers), work performed, rainfall and climate; also details of names of passengers by the mail coach, numbers of cattle killed, sheep and kangaroo skins sold, sheep and cattle sold and bought, camels, wool clip, sheep sheared, station buildings erected and much more, along with some records of South Gap station and other related stations.

1.6. Letters to W.D. French from his sons and daughter:

2.1. Station correspondence. Letters re station and general business, mainly written to and from W.D. French 1910-1990

Will of Jessie Christina Ann Hall 1923

Property and estate of W.H. Greenfield

Estates of W.D. and Agnes French

5.7. Records of contract work on dams, including payments made and measurements of dams. Arranged roughly chronological 1930s-70s

W.D. French and others

Newspaper and journal articles, photocopies and printouts of web pages concerning the French and Greenfield families and Pernatty Station. Also list of bores and wells on Pernatty Sation compiled by R.K. Johns in 1968.

Handbook for the man on the land: Waratah wire and wire products / Rylands Brothers (Australia) Ltd., Newcastle [ca 1934]  NOT IN BSL

Everything for the Engineer and the Craftsman / Harris Scarfe, Ltd, Adelaide [192?] [general catalogue]