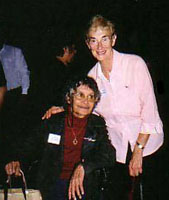 Fay Gale was a cultural geographer, a leading academic and a passionate advocate of equal opportunity for women. She made significant contributions towards an understanding of the inequalities and injustices suffered by Aboriginal women and pioneered reforms to assist women to achieve their full academic potential.

Born in Balaklava in 1932, Fay Gale attended an all girls' secondary school where her teachers gave her a strong interest in academic achievement and a life long feminist perspective. She gained a first class honours degree from the University of Adelaide in 1953 and, while preparing her PhD, married and had two children. Her 1960 PhD thesis, A Study of Assimilation: Part Aborigines in South Australia, explored the complex and often tragic lives of part-Aboriginal women who had been taken from their mothers as children, and was published as a book in 1964.

In 1978, she became the first woman to be appointed as Professor at the University of Adelaide. In her academic career, Fay Gale continued to study the experiences of Aboriginal people and to document the vicious cycle of marginalisation they suffer through devastating effects upon the stolen generation, the disempowerment of Aboriginal women in their traditional roles, the subsequent cycles of juvenile crime among Aboriginal men and the fear, depression and violent abuse suffered by Aboriginal women.

In 1989, Fay Gale was awarded an Order of Australia for her contribution to the knowledge of Aboriginal people and their culture.

Photograph and biographical note extracted from the biography of Fay Gale by Lado Shay on the Australian Women's History Forum website.

Professor Gale deposited these papers related to her work concerning Aboriginal conditions and welfare with the University of Adelaide in 1990. They contain correspondence, original research and survey data, and a collection of registers and records compiled from official sources, notably the Point Pearce and Point McLeay births, marriages and deaths registers. Supporting the original research data is an extensive collection of background material sourced from and by Aboriginal associations, government officials and departments, students, and other researchers. The papers include some research files of Judy Inglis (Series 9) sent to Fay Gale in 1964 following Inglis' death, and the Point McLeay and Point Pearce genealogical card files compiled by Doreen Kartinyeri (Series 10).

Series 11-13 were transferred from Professor Gale's office after her death.

General correspondence files 1959-1973 3cm
Includes correspondence with government officials and depts on Aboriginal matters, fellow researchers, mission and Aboriginal associations and institutions, on Aboriginal policy and welfare, and research sources. Correspondents include Alta Gordon, Di Barwick, Laurie Bryan re proposed Aboriginal Land Settlement Scheme (see also Series 8.1), Louise Hercus, Ronald Berndt (UWA) and Professor G. Lawton on Geography departmental matters. Also numerous invitations to speak to schools, service bodies and other associations. 1964 correspondence includes a report by Sgt Bert King of a July Aboriginal Advancement League trip to Pt Augusta, with a copy of a letter to Mr Riches from the Aboriginal Progress Association re newspaper reports on Pt Augusta and the need for a hostel (see also Series 7.2); 1965 includes letters re the establishment of an Aboriginal Scholarship Foundation; and 1966 letters of support re scholarship for John Moriarty.

Correspondence 1998-99
Letters of congratulation on appointment as President of the Academy of the Social Sciences in Australia, and re appointment to Australian Research Council

2.2 "The Miracle of Ernabella: nomads of the pre-stone age become Christian": interview with the Rev. Ronald Trudinger (1958)3 p. typescript

SERIES 3 FILES CONTAIN PERSONAL RECORDS OF ABORIGINAL PERSONS AND HAVE BEEN EMBARGOED UNTIL THE YEAR 2025.

Survey of 1,917 Aboriginals in Adelaide, including those living in institutions, or fostered or adopted into white families. Sponsored by the Social Science Research Council of Australia, the Australian Institute of Aboriginal Studies and University of Adelaide Research Grant.

4.2 Survey of schools (arranged alphabetically by name of school)

4.11 Notes/comments on Aboriginal and white attitudes ca. 1964-1966: includes many quotes of Aboriginal viewpoints

4.15 Notes on SA law relating to Aborigines for Chapter 3 of Urban Aborigines: includes court files for conspiracy case against Dick Carroll et al. 1965; photocopied regulations and articles; MS notes; correspondence with Roma Mitchell re her paper on the Aboriginal and the Law

Study commissioned by the Commission of Inquiry into Poverty. Survey covered Aboriginals living in family households in the city of Adelaide in 1973, excluding Aboriginals in institutions or in white households.

SERIES 5.1 FILES CONTAIN PERSONAL RECORDS OF ABORIGINAL PERSONS AND HAVE BEEN EMBARGOED UNTIL THE YEAR 2025.

5.4 Summary tables on Aboriginal women in the urban situation: introductory details from published report on poverty, Aboriginality as recorded in census, employment, health, members of family away from home, grandchildren living with grandparents, grandparents' place of residence, family structures (compiled by student/research assistant?)

Series 7. Other research projects and publications by Fay Gale. 15cm

7.4 "Aboriginal Employment in Adelaide" by Fay Gale and Ian Lewis [1966?] Typescript: report on assessment of employment opportunities for Aborigines in Adelaide from the employers' viewpoint. This assessment formed part of the larger 1964 survey on Aboriginal movement into Adelaide (see Urban Aborigines files)

7.6 "Aborigines in Adelaide", for the Foundation of Aboriginal Affairs, 1966. Typescript, 2p. Includes letter to Mrs L.H. Cocks of the Foundation

7.10 "Report to the Select Committee on the Welfare of Aboriginal Children" [1969] Typescript

7.12 "The Need for Training Facilities for Sociologists" [1965?] Typescript

a. Published pamphlets and typescript articles on Aborigines 1950s-1960s: includes

b. Student project "The Establishment of Aboriginal Reserves in the County of Adelaide and Their Subsequent Occupation in the 19th Century" / Irene Hill and Dzintra Sils

Judy Inglis, (1929-1962), graduated from the University of Melbourne as a Master of Arts and was later awarded a Diploma in Anthropology at Oxford University. She was the principal Administrative Assistant for the Australian Institute of Aboriginal and Torres Strait Islander Studies at the time of her death. This material was sent to Fay Gale for her use in 1964 (see letters from Diane Barwick in Series 1 General correspondence file) Most of the Inglis papers are held by AIATSIS.

a. Correspondence 1961-1964: includes letter from Ken Inglis to Fay Gale 14/9/1964 re dispersal of Inglis' research material, correspondence from Aunty Glad, and letters from informants at Point Pearce and Point McLeay
b. Point McLeay and Point Pearce notes/genealogies, including folded A2 sheets of genealogies
c. Notes on Thomas Adams from SA Archives, including record of Thomas Adams marriage to Konarto in 1948 and ms extracts from the Letterbook of the Protector of Aborigines 1840-1857
d. Notebook/address book ca. 1957-1959

Series 10. Genealogies on card files compiled by Doreen Kartinyeri and reproduced in her genealogical publications. 80cm

- photos re to thesis? Yalata Reserve; 1 captioned Nepabunna; Aboriginal individuals and groups, housing (no list) 49 photos (some labelled with chapter and page numbers))

11.5. ‘Index to photographs’ file with various listings of photos

3” tape:
- Tape from Wattle(?) Paul ‘has been recorded at a different speed’

The journal Wungudda: official organ of the Aboriginal Community, Port Augusta (1968) has been catalogued separately at Rare Book 305.8991505 W965.