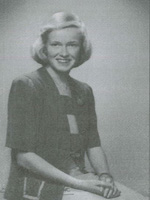 Alison Gent, née Hogben, was born at Rose Park, Adelaide and brought up by her widowed working mother. She attended Walford School and went on to gain an MA at Adelaide University. She thrived in the University environment, achieving double First Class Honours in French and English under Professors Cornell, Jury and J.I.M. Stewart. She joined in amateur dramatics, was a member of the Student Union, and was active in the University Anglican Society.

Alison married John Gent, an Anglican priest, in 1947 and they had five children. She had a deep interest in the church and an awareness of inequalities for women.  In 1970, Alison returned to part-time tutoring at Adelaide University in the French and English Departments, and sought publicity about the proposed Women's Liberation Movement. She became heavily involved in its activities.

In 1980, the year that Alison and her husband separated, she began a discussion group about the ordination of women, her interest stemming in part from her personal frustration. She became involved and was a foundation member of the Movement for the Ordination of Women, which began in Adelaide in 1984, and served many years on the MOWatch Committee as a Vice-President.

Adapted from the Australian Women’s Register, Trove (National Library of Australia) and MOWatching, May 2010.

These papers were donated to the Library by Rev. Yvonne Lesley McLean in January 2016.

These papers are Gent’s tutoring notes with hand written annotations for class lectures.