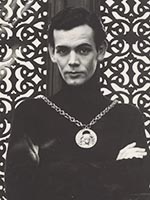 Kenneth Gillespie was born in Launceston, Tasmania, in 1929. At the age of 16 he moved to Melbourne to dance professionally with the Borovansky Ballet, during which Borovansky created the role of Lieutenant Brandt in The Black Swan for him.

Awarded a scholarship to the Royal Ballet School, Gillespie then went on to make a successful dance career abroad, dancing roles with the Royal Ballet, the London Festival Ballet, Serge Denham's Ballet Russe de Monte Carlo (as one of the youngest premier dancers in America), and the New York City Ballet. The ‘American Festival Ballet’, a cultural exchange company, was created around the young Gillespie to tour Europe and South America.

In 1960 he returned home to Tasmania for family reasons, and established a ballet studio behind his Wellington St house, from which the performing ensemble known as the Tasmanian Ballet was founded in 1961. The repertoire of the ensemble comprised versions of classical ballets as well as more contemporary works and poetry readings interpreted in dance. Gillespie also performed with the Ballet Guild, notably in the televised performance of The Lake.

In 1974, with the support of the Federal Government, the Tasmanian Ballet became a fully professional company. Gillespie staged and featured as premier danseur for the company in classical ballets as well as commissioned works by Graeme Murphy and others, as well as original works by Gillespie. Former Sydney Dance Company artistic director and Tasdance patron Graeme Murphy credits Kenneth Gillespie as having a major influence on his life.

The company toured through Tasmania and to mainland Australia, frequently performing for primary school children with productions such as The Nutcracker and Laurel Martyn's Peter and the Wolf. Gillespie retired from the company in 1979 and moved to Newcastle for the warmer climate.

In 1989, Gillespie was honoured with a knighthood of the Order of St John of Malta and Rhodes for his contributions to the international world of ballet. He died of stomach cancer on February 8th 2010 at the age of 80.

These papers were donated to the Library in 2014 by Peter Saunders, cousin to Sir Kenneth Gillespie.

Biographical
Includes:
-  Memories of Gillespie by former students, dance partners, wives and friends displayed at Tasdance Studio during a retrospective, with a covering letter and 2 photographs
- Extract from “Australia Dances …” / Alan Brissenden and Keith Glennon (2010) and Who’s Who in Australia 2005