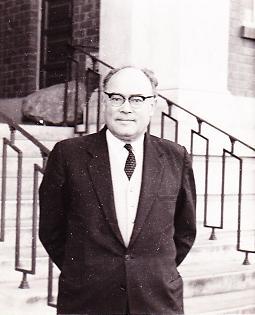 Martin Glaessner was born on Christmas Day 1906 in Aussig (then part of Austria). He graduated from the University of Vienna as a Doctor of Laws in 1929, and a Doctor of Philosophy in 1931 with a thesis on fossil crabs from the Vienna Basin. After some research work at the British Museum (Natural History) in London and lecturing in Vienna 1930-31, he was invited to Russia in 1932 as a ‘Foreign specialist’ and worked there until 1937, mainly in the Academy of Science in Moscow and on expeditions in the Caucasus, on palaeontological problems related to the search for oil.

In 1938 he joined the geological staff of the Anglo-Iranian Oil Co. In London and directed to continue work on a textbook on micropalaeontology. Glaessner was seconded to the newly formed Australasian Petroleum Co. of Melbourne in 1938 to organise the joint companies’ micro-palaeontological laboratory in Port Moresby in the search for oil in New Guinea. During wartime suspension of work in New Guinea the laboratory was transferred to Melbourne in l942 where Glaessner completed a comprehensive report on the stratigraphy of the Companies’ areas in Papua New Guinea and a geological map of New Guinea on behalf of the Australian Army, before resuming work in Papua New Guinea from 1946 to 1950.

In 1950 he was invited to join the staff of the Geology Dept. of the University of Adelaide as Senior Lecturer, and subsequently appointed Reader in 1952, Professor in 1964, and Emeritus Professor from the end of 1971.He pursued palaeontological studies ranging from the earliest fossil protozoa to the earliest Australian mammals, and on research on historical geology and stratigraphy of the Precambrian, Cambrian, Mesozoic and Tertiary of Australia and the Indo-Pacific region.

He was awarded the degree of Doctor of Science by the University of Melbourne in 1946 and was elected a Fellow of the Australian Academy of Science in 1956, later serving on its Council. He was also a Research Associate of the American Museum of Natural History Dept of Palaeontology, a Fellow of the German Academy of Science Leopoldina, Clarke Memorial Lecturer for 1953 of the Royal Society of NSW, and was awarded the Walter Burfitt Prize for 1962 and Verco Medal of the Royal Society of SA in 1970. During a study tour around the world in 1960 visited the USSR and USA investigating and discussing with other workers the oldest known fossils.

Glaessner was also Chairman of the Australian National Committee for Geological Sciences from 1966; Member of the Pacific Science Committee of the Australian Academy of Science; Member of the Deep Sea Mining Committee (now Committee on the Law of the Sea) of the Australian Branch of the International Law; also Vice-President of the Commission for Stratigraphy of the International Union for Geological Sciences; Colombo Plan expert by invitation from the Government of India in 1956; visiting lecturer in many countries, and consultant to the UN Economic Commission for Asia and the Far East in 1969 and 1970.

Glaessner published over 170 scientific papers including Principles of Micropalaeontology (Melbourne, 1947)

Some papers removed by Glaessner from the files of Douglas Mawson have been transferred to the Mawson Papers MSS 009 ie: correspondence from GS Platten of the Methodist Mission, Rabaul, PNG to Professors Howchin and Mawson; ‘Mawson’s algae file’ ca 1917-41’ including correspondence with CD Walcott of the Smithsonian Institution, and Professor Young of Cape Town; copies of letters by Mawson written from Cape Town 17/10/1929.