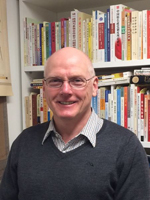 Gerry Groot was born in 1960 in Murray Bridge, South Australia and was raised in South Australia’s South East. He attended Millicent High school and then completed a Bachelor of Arts at the University of Adelaide. With interests in the study of Chinese, history and politics, he went on to study honours and wrote his thesis on the Chinese historiography of united front work. Gerry then spent several years at Shanghai’s East China Normal University as a language student before returning to Adelaide to commence a PhD on united front work and China’s minor parties and groups.

A revised version of Gerry’s PhD thesis appeared in 2004 as the book, Managing Transitions: The Chinese Communist Parts, United Front Work, Corporatism and Hegemony (Routledge) which was launched by the then opposition spokesman on foreign affairs, Kevin Rudd. Since 2004, Gerry has published on a variety of issues including crisis management in China, soft power, contemporary united front work, and South Australia-China relations.

Gerry teaches Asian studies, with topics ranging from the impact of Asian influences shaping Western societies, to Chinese politics, religion and culture. He has held several positions at the University of Adelaide, including Head of Discipline, Centre for Asian Studies and Senior Lecturer in Chinese studies. His research interests include the idea and applicability of Nye’s concept of soft power to Asia, the contemporary practice and history of Chinese Communist Party united front work and Asian influences shaping Western culture, especially gastronomic and musical.

While in China, Gerry appeared in Chinese movies and TV series, most notably Shanghai Yi Jia Ren (A Shanghai Family), and Xiao Dao Ji (The Small Knives Society). He also appeared as an extra in Jackie Chan’s Drunken Master II. Other interests include the diffusion of Chinese and Asian food styles and Western attempts to encapsulate oriental themes in music. Gerry is a collector of Chinese cookbooks and Orientalia music.