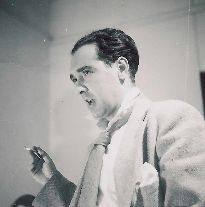 Max Harris, poet, editor and publisher, has generally been regarded as the founding father of Australian modernism in the arts.

Born in Adelaide in 1921 and educated at the University of Adelaide, Harris published his first book of poetry The Gift of Blood in 1940 at the age of 19. He achieved notoriety through the “Ern Malley” poetry hoax of 1944, which aimed to discredit the modernist movement in Australian poetry, and through his subsequent prosecution for publishing obscene literature.

Between 1941 and 1945 he edited the avant-garde journal Angry Penguins which aimed to promote the international influences of surrealism and modernism into the Australian artistic scene. The Angry Penguins journal produced no major Australian poet but had a real and lasting influence on artists such as Sidney Nolan, John Perceval and the Boyds. During this period Harris also co-founded, with John Reed, the firm of Reed and Harris, a pioneer publisher of modern Australian poets, novelists and intellectuals. In subsequent years, Harris co-edited with Henry Dutton the literary quarterly Australian Letters (1957-1968), the monthly Australian Book Review (1961-1974) as well as books of criticism.

Max Harris also played a central role in establishing Penguin and Sun Books paperback imprints in Australia and became, through his Mary Martin Bookshop, one of the best known booksellers in Australia. He was also a senior columnist of literary and social criticism for The Australian, in addition to his role as a well known and sometimes controversial drama, theatre and arts critic on radio and television.

1.1. Books texts and typescripts by Max Harris and others

1.11. Ern Malley papers 1944-1947, 1987-89 (many undated). 15 cm.
Folders 1–3
Photocopies of the Ern Malley poems as published in Angry Penguins, with copies of articles and reviews of the poems. 3 cm.
Folder 4
Typescripts (some originals, some copies) of letter re the poems by Ethel Malley and of Harris' statements about Ern Malley and his work. 2 cm.
Folder 5
Typescript of text of broadcast by John Thompson "The Ern Malley Story", an ABC feature (n.d., 31 p.); Photocopies of newspaper reports of the Angry Penguins indecency trial. 1 cm.; Prints and photocopies of paintings by Sydney Nolan to accompany the Ern Malley poems. 2 cm.
Folder 6
Published copy and typescript (with amendments) of The poems of Ern Malley; comprising the complete poems and commentaries by Max Harris and Joanna Murray-Smith (Allen & Unwin, Sydney, 1987) 4 cm. [Supplied by Allen & Unwin at the request of Max Harris]
Folder 7
Catalogue of 1989 Australian National Gallery exhibition Angry Penguins and realist painting in Melbourne in the 1940s. 1 v.; Issue of Overland 112, with covering letter by Max Harris explaining that it "contains what can be regarded as the definitive and accepted final judgement on Ern Malley. (See Dorothy Hewitt)." 1 v.
Folder 8
Tape recordings of Max Harris in conversation with Mairi Nicolson, ABC Radio, c.1987 and of ABC Radio National broadcast 'Forty Years On' by Max Harris and Barrett Reid, introduced by Ron Blair, 13 March 1988. 2 cassette tapes. [Supplied by the ABC at the request of Max Harris] Tapes digitised to DVDs 2013.
Folder 9
Photocopies of Angry Penguins broadsheets 1-10 (1946). Originals have been catalogued separately.

Series 2. Cuttings of published poetry and articles by Max Harris, and reviews of his work

3.1. Miscellaneous correspondence relating to literary work submitted (by Harris and others) 1947 and undated. 4 items. Includes typescript poem by Brian Medlin (untitled, undated) and Harris’ typescript article “Sermons at Emmaus”
3.2. Correspondence re publication of poems by James K. Baxter, 1972. 1 cm. With typescript of “Two obscene poems”, letters by Baxter to Sam Hunt (typescript) and Harris (typescript and holograph), and draft introduction to the poems by Harris.
3.3. Outline, with lists and draft letter, of proposed 'Max Harris Food and Wine Guide', 1975-76. 1 cm.
3.4. Correspondence re [opposition to] Traditional Markets Agreement (as affected bookselling) 1972-1975. 1 cm.
3.5. Correspondence re support for foster children under Foster Parents Plan of Australia (including many letters from children supported) 1971-1975. 3 cm.
3.6. Miscellaneous (personal and business) correspondence 1964, 1972-1975, 1979-1985. Including Dissolution of agreement with Mary Martin in book partnership, 1964; documents re dispute over sale of Lord of the Rings, 1974; appointment as consultant to Macmillan Co. 1979 and report by Harris on Macmillan London discussions.

Series 5. [Six paintings illustrating ‘The circus and other poems’ by Max Harris] by Arthur Boyd created in 1961. Previously been catalogued as SR Oversize 75 B789A.

5 of the paintings were reproduced in the series "Australian artists and poets" published in vol. 4 no.1 (1961) of the journal Australian letters (founded and co-edited by Max Harris).

This is the only remaining complete set of the 19 author/artist collaborations commissioned by Harris. The paintings were presented to the Library by Mr. and Mrs Max Harris in July 1982 to accompany his Papers. They are currently hung in the Collections Room.