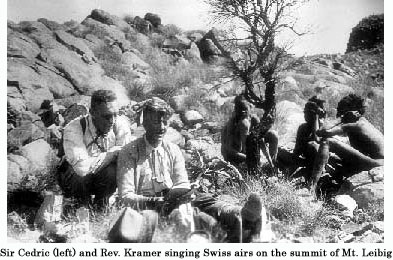 Sir Cedric Stanton Hicks came to Adelaide in 1926 after an outstanding student career at the University of Otago in New Zealand, war service and a research studentship at Cambridge, to take up a Sheridan Research Fellowship and lectureship in Physiology at the University of Adelaide in 1926. He was appointed Professor of Human Physiology and Pharmacology from 1927, a position he retained until 1958 when he became Emeritus Professor. He was knighted in 1936 for his services to medical science.

Between 1926 and 1936 he made several field trips to Central Australia to study the basal metabolism of indigenous Australians.  In 1930 he travelled to Koonibba Mission Station with a grant-in-aid from the Rockefeller Foundation, before proceeding to Cockatoo Creek, Mt. Liebig and Ernabella on expeditions of the University's Board for Anthropological research.

With the outbreak of WWII he again enlisted in the AIF where, because of his research and practical surveys on nutrition, he was quickly appointed temporary catering advisor and subsequently Director of Army Catering, a position he held until 1952.

The manuscripts and photographs in Series 1-5 relate to these expeditions. They were donated to the Barr Smith Library in 1983 by Sir Cedric's second wife, Lady Valerie. Other items in the collection were received by private deposit (Series 10) and by transfer from the University Historical Collections in 1983-84 and 1988.

Sir Cedric's memoirs, Tinker, tailor, soldier, sailor, were presented by Lady Valerie Stanton Hicks in 1993 through the University of Adelaide Foundation. The war-time diaries and notebooks (Series 21) and additional papers (Series 22-24 and Series 6.4) were presented by Lady Valerie in October 2001. Further additions were transferred from University Collections (at the time Art & Heritage) in October 2009.

Other papers of Sir Cedric Stanton Hicks are held by the National Library of Australia.

1. Original manuscript and book of illustrations and photographs for Just in time. A physiologist among the nomad tribes of Central Australia 1929-1939. 1974. 2 volumes (typescript)
This work has been digitised and is available online through the Adelaide Research & Scholarship digital repository.

2.  Correspondence with Barbara Dennis, Department of Physiology, University of Adelaide, concerning possible publication of the manuscript Just in time.  1982.  2 items. Also correspondence between Valerie Hicks and Dr Barbara Dennis 1995 re errata and amendments to the memoirs.

4.  Film positive of negatives of photographs taken by C. Stanton Hicks and others during expeditions to Cockatoo Creek (August 1931), Mt. Liebig (August 1932) and Ernabella in the Musgrave Ranges (1934-1937). Also, 1 strip of unidentified Aboriginal photographs and 1 strip taken in Chichén Itza in Mexico.  1931-1937 and undated.  23 strips.

NOTE: Prints of some of these films are held in the The State Library of South Australia [REF: PRG 418].

7.  Spectroscopy in the Ultra Violet and Infra Red Regions as an aid to Biochemical, Pharmacological and Medico Legal Research, by Cedric Stanton-Hicks (thesis and appendixes). Typescript 77p. + unpaged bibliography, copies of published papers and typescript paper 'Congenital Cardiac Defect : A Study in Clinical Physiology of a Unique Case'.

8.  Dissertation for the degree of Ph.D. Cantab.  'A Study of the chemical and physiological relationsips of Thyroxin'.  1925.  1v.

10.  'An account of the Adelaide Medical School, 1926-1956, as seen from the point of view of the first Professor of Human Physiology and Pharmacology', by Hicks.  n.d.  21p.
This paper has been digitised and is available online through the Adelaide Research & Scholarship digital repository.

13.  Record of Physiology Mammalian Practical - group of 2nd year medical students under Roy Muecke. Observations, tracings and graph; also photographs of of Hicks supervising a 1929 practical teaching session in mammalian physiology in the old practical lab in the Darling Building. One photograph annotated: “the decisive year. Bonnin and Muecke at right. Kymograph fabricated from old Harvard machines … the success of this year decided me to continue with the method’ Dr RF Matters facing the camera (3 copies). Also photographs of Mammalian Physiology Laboratory in the Darling Building 1938-1939 (2 photographs, plus additional copy). 1929  1v.

14.  Correspondence, reports and case notes re research by Hicks and Dr. Donald Cheek on Pink Disease and efforts to obtain financial assistance for Cheek to continue work.  September 1949-May 1950.  2cm.

15.  Further Observations on the Pharmacology of the Alkaloids of Duboisia Hopwoodii by Margaret E. MacKay. (typescript)  50p.

19.  Tape and transcript of interview of Hicks by Dr. G. Scroop and Mr. M. Tyler, 22 October 1975. Discussion relates particularly to items given to the University by Hicks.

21. Diaries and notebooks relating to war-time service as Director of Army Catering 1941-1947. 4v.
(Notebook of Alice Springs-Darwin field visits, commenced 25 May 1941; diary of visit to U.K. and U.S.A. 3 July-15 October 1944; Japan diary, commenced 6 January 1947. Also typescript (photocopy) of notes ‘To the soldier’ to be included in the ‘Compo’ ration packs, with recipes for 12 men and menu and food allocations)

23. Program of farewell dinner tendered by officers of the Australian Army Catering Corps, Melbourne 2 February 1946, and birthday card 6 June 1962 thanking him for his services to soldiers' welfare.

Photographs of Hicks etc
- in 1926 in Vienna ‘at approximately date of accepting Fellowship at Adelaide’
- Hicks in uniform (2 photographs)
- 'the cooker in the making’
- with the 2000th unit of the Wiles Bros. Mobile Cooker
- at retirement dinner (group photograph)
- being made Member of Honour of the International Society of Nutrition and Vital Substances
- b&w photograph of painting of Hicks in academic dress
- 1965 Christmas card with sketch of ‘Woodley’, the Hicks’ house at Glen Osmond.

Article on Hicks elected Honorary Life Member of the SA Council on the Ageing.

Copy of a letter 5/7/1973 from Lieutenant General Sir Mervyn Brogan to Hicks re attendance at the 60th meeting of the Ration Scales Committee; letter from Valerie Stanton Hicks to Professor McMillan 21/1/1994 re Hick’s memoirs, the Dept of Physiology and other matters.

Copies of records from the University of Adelaide Archives (correspondence, Hick’s staff record, list of books and apparatus purchased by Hicks).