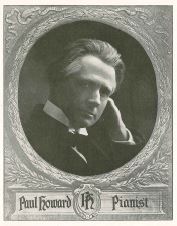 [Ernest] Paul Howard (1875-1953)
Paul Howard was born in London in 1875 and emigrated with his mother and three older sisters to Adelaide in 1883. At the age of 12 Howard was apprenticed to the photographic studio of Stump & Co. and later trained in shorthand at Muirden Brothers Shorthand and Commercial College. At the age of 20 he commenced part-time studies at the University of Adelaide, supporting himself as a photographer and shorthand teacher, before graduating as a public accountant and auditor in 1901. In 1902 he established the Howard Commercial College, later expanding the business to provide printing and secretarial assistance, and in 1908 expanding the school to Howard's Commercial and Correspondence College. Howard took some lessons in organ at the Elder Conservatorium but although largely self-taught, he was an excellent and dedicated pianist who performed numerous piano recitals and played most of Godowsky's compositions. Howard considered Godowsky to be the greatest living composer for the piano and corresponded with him. In 1935, when he learnt that Godowsky was suffering from severe depression, Howard founded The International Godowsky Society in an attempt to cheer him up. Howard, known fondly as Godowsky's apostle, was successful in promoting Godowsky's works and attracted world-wide support from prominent musicians and other famous personalities. The newsletter of the Society ‘After Midnight Thoughts' consisted largely of letters to and from members, typed up after midnight and reproduced mimeographically. He also played host to many touring music celebrities at his home in Adelaide. Paul Howard died in 1953 at the age of 78, after which the Society did not survive. 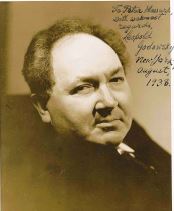 Leopold Godowsky (1870-1938)
Leopold Godowsky was a Polish American pianist, composer, and teacher. Almost completely self-taught, Godowsky was composing and becoming proficient on both piano and violin by the age of five. He gave his first concert at age nine, touring throughout Lithuania and East Prussia. In the 1800s toured North America and gave numerous recitals in Paris and London, eventually becoming a protégé and friend of Camille Saint-Saëns.

In 1890 he returned to the United States and began a teaching career, later also teaching in Vienna. The outbreak of WWI drove him back to the United States where he lived for the rest of his life. Much of the 1920s was spent touring around the world. In 1930, Godowsky suffered a severe stroke which left him partially paralysed. He continued playing piano for friends and admirers, but never gave public performances. He died of stomach cancer in 1938, at the age of 68.

He was of the most highly regarded performers of his time, praised by listeners, colleagues, and critics alike. He became known for his theories concerning the application of relaxed weight and economy of motion in piano playing. As a composer, Godowsky is best known for his transcriptions of works by other composers. His best known work is Studies on Chopin's Études (1894-1914).

Peter F. Howard is the youngest son of Paul Howard. He served as a pilot in 86 Squadron during 1945. After the war he studied geology under Professor Douglas Mawson and was awarded a BSc (Hons) degree and a University medal from the University of Adelaide and Masters and PhD degrees from Harvard University. In his career he spent 25 years in academic life, including 18 as Professor of Geology at Macquarie University, and 25 years in the mining industry as a mining/exploration geologist and as an international resource consultant.

These papers were donated in March 2015 by Emeritus Professor Peter Howard, and have been listed largely as arranged by the donor. Paul Howard's papers, and in particular the correspondence, contain a wealth of information about the music world, both internationally and in Adelaide, between 1908 and 1953. The Cazneaux photographs were added to the collection by Perter F. Howard in May 2016.

Godowsky's collected scores published in 2001 in 5 volumes as The Godowsky collection compilation and introductory notes by Millan Sachania was also donated to the Elder Music Library by Peter Howard in 2006.

Mi contra fa: the immoralisings of a Machiavellian musician (Da Capo Press, 1947) by Kaikhosru Shapurji Sorabji, and Godowsky, the pianists' pianist: a biography of Leopold Godowsky (Appian Publications & Recordings, 1989) by Jeremy Nicholas have been catalogued separately for the Rare Books Collection.

1.1 ‘After Midnight Thoughts: the life of Paul Howard' / Peter F. Howard [2005] (computer printout, 83 p.)
Incomplete biography of Paul Howard, lacking chapters II on ‘The pianist, writer and critic' and IX (Vale). Includes a chronological listing of Paul Howard's recital programmes, a transcribed selection of Howard's programmes 1908-1939, and a complete list of compositions played by Paul Howard. Critics opinions can however be found in Series 1.3.

1.2 ‘After Midnight Thoughts on Leopold Godowsky to members of the International Godowsky Society' / Paul Howard; [restructured by Peter Howard in verbatim order] [1944-53] (Computer printout, 184, [2] p.)
Written in instalments ca 1938-1942 by Paul Howard to promote the works of Leopold Godowsky and membership of the society. Includes listings of the works of Godowsky, and members of the Society in 1945.
The original text of After Midnight Thoughts by Paul Howard is held by the Library of Congress and the NY Public Library, with an additional copy catalogued separately for the Rare Books Oversize Collection at 780.5 G589ZH

2.1. Programmes of 120 performances, most offered in Adelaide and surroundings, with some performances in Hobart, Launceston, Perth and Broken Hill. 3 cm.

• Index pasted inside front and back covers
• Also circulars and letters of the Society, lists of Society members, copies of After Midnight Thoughts; articles on and writings by Godowsky; clippings on Godowsky performances by Paul Howard; university prize awarded to Leo Howard; some programmes, including piano recital by Mary and Peter Howard 6/4/1939; articles on Henry Irving and Bernard Shaw; correspondence to the Raftos family (banana growers in Queensland) known as ‘The Raftos Saga; typescript of Bundey Prize poem 1937 by John Stokes (annotated: Pal Howard tr. John Stokes)

Much of the correspondence consists of mimeograph reproductions (for inclusion in ‘After Midnight Thoughts' instalments), as well as some later correspondence with Peter Howard

• Obituary of Shura Cherkassky from The Times
• Photocopied book chapters; books used by Peter Howard from State Library of NSW

Comprised of Peter Howard's ms notes, originals and copies of source materials
1. Godowsky correspondence with Paul Howard (1919, 1932-38) and Howard to Godowsky (1932-38). Also 2 signed photographs of Godowsky inscribed to Howard, August 1938
2. Biographical sources on Godowsky (obituaries, published biographies, book extracts, magazine articles). Also copy of tribute to Godowsky at memorial service in Los Angeles by Louis Bruenberg, and obituary of Frances (Gershwin) Godowsky = daughter-in-law of Leopold Godowsky
3. Godowsky - the Master. Reviews by pianists (mostly photocopies)
4. Structure of ‘After Midnight Thoughts' when written. Ms notes on Peter Howard's editing of ‘After Midnight Thoughts', tables of dates, list of correspondents, source of the title
5. Changes to the order of the Instalments of ‘After Midnight Thoughts', and additional copy of Instalment 14: Letters of Godowsky
6. Revival of recordings. Ms notes on performers of Godowsky's works, photocopied articles, letter 11/12/1974 from Elmer Steuernagel (PHD student) to Mary Piotrowski (Paul Howard's daughter) re availability of scores and correspondence