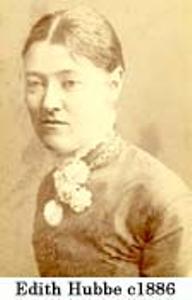 Edith Agnes Hübbe (nee Cook), was born in 1859 and began teacher training in 1874 after she topped the list in the Board of Education examinations.  She taught at Grote St. and then at the new Advanced School for Girls, becoming Headmistress in 1881.  She resigned from the Education Department in 1885, shortly after her marriage to Samuel Grau Hübbe, a valuer and inspector in the Surveyor-General’s Department, but the following year opened her own Ladies’ School in Knightsbridge with her sister Harriet Cook. Samuel Hübbe was killed in action in 1900 during the South African (Boer) War, and following his death Edith became increasingly involved in education, including in the kindergarten teaching training movement. She died in 1942.

Edith and Samuel’s oldest son Max Ulrich (b. 1891) took up farming in Western Australia, Hermann Fritz (1895-1916),  was killed in World War I, and Janet Doris (1887-1950) married Allen Simpson in 1910.  The youngest daughter Harriet Marjorie (1893-1988, generally known as Marjorie) trained at the Kindergarten Teachers College and ran her own kindergarten from the family home prior to her marriage in 1922 to Alfred Beech Caw (a friend of her brother Max) and life on a farming property at Kojonup in Western Australia. After her husband’s death in 1966 Mrs Caw returned to Adelaide and took an active interest in compiling the records of her own and inter-related families and in particular of the life of her mother and her contribution to the history of the education of women in South Australia.

This collection comprises correspondence and other papers collected by Mrs H.M. (Marjorie) Caw relating to the life and work of her mother, Edith Hübbe, herself, her sister E.U. (Rica) Hübbe and other members of the Cook, Hübbe, Caw and related families.  The papers include material on the teaching life of Edith Hübbe, her sister Harriet Cook and daughter Marjorie Caw, and on teaching and education of women in South Australia generally, and some papers relating to the medical career of Rica Hübbe.  There is extensive family correspondence, and letters to Marjorie Caw from the writer Mary Grant Bruce and the painter Dorrit Black.  There is also a copy of a diary kept by Samuel Hübbe, father of Marjorie Caw and husband of Edith Hübbe, during service in the South African (Boer) War, and a report on a trip to Papua New Guinea by H.M. Bathurst in 1941.

The papers were deposited with the Barr Smith Library by Mrs Caw’s children, Mrs A.V.(Virginia) Lee and Mr William A. Caw, in December 1992, on the advice of Mrs J. Simpson.

12. Personal and financial documents of Edith and Sam Hübbe, including  birth and marriage certificates, will and extensive Hübbe/Cook  genealogies.  1859-1930 and undated.

15. Papers relating to the early teaching career of Edith Hübbe (Cook),  including Senior Examination results; letter from Annie Montgomery  Martin 29 June 1874 to "My dear girls" with covering letter of John  Hartley (Inspector General of Schools) 19 April 1881; correspondence  and others papers relating to her service in the Education Department  1874 and 1885; and newspaper cutting on the death of Hartley 1896. 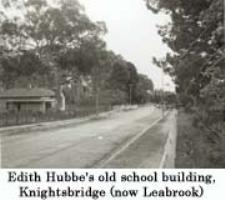 17. Biographical articles on Edith Hübbe (typescript and printed), with brief  note by H.M. Caw on her mother and newspaper articles 1940 on the Hübbes at White Hut.

see also Papers of Edith Hübbe and Dr Ulrica (Rica) Hübbe for letters received by them from Marjorie Caw (Series 2 and Series 50).

39. Miscellaneous letters and postcards received, 1905-88 and undated. 8 cm.
Includes letters from Olive Kelsey 1948 and 1951 and letters to others by Kelsey re disposition of her effects, apparently unsent;  and correspondence 1978-83 with Elizabeth Warburton and Mary Hutchinson regarding information on the life of Edith Hübbe etc. [for tapes and transcripts of interviews see Series 47/15]

45. Copies of letters sent by Marjorie during trip to Europe, Feb.-July 1914,  and miscellaneous letters by Marjorie Caw, 1941-78, 1985-86 and  undated.  1 v. and 9 loose items.
[1985 letter is unfinished, includes reference to statue and portrait of  Catherine Helen Spence and to proposed biography of Spence by Susan Magarey]

47. Papers of Marjorie Caw relating to her involvement in early childhood  education and the Kindergarten Union of SA (including letters from and  other material relation to Lillian de Lissa and Lucy Morice) and the Country Women’s Association.  1911-86.  10 cm.

Papers relating to the Country Women’s Association
47/12. Report and other material on the ACWW conference, Copenhagen  1950.
47/13. Address to the CWA Kojonup Branch on the need for higher education and notes on the history of the Kojonup Branch, undated.

Miscellaneous
47/14. Transcript of tape recording of interview with Marjorie Caw and others,  principally re people in 1870 list of seatholders and subscribers to Unitarian Christian Church.  undated.  4 p. typescript.
47/15. Transcript of interview of Marjorie Caw by Mary Hutchinson May 1981 re "Childhood Memories" and tapes (4) of interviews by Hutchinson  and Barbara Crompton re her schooldays, her mother Edith Hübbe and the Hübbe family, and her trip to Europe in 1914.

50. Miscellaneous letters and cards received by Rica Hübbe, 1914-58 and  undated.

see also letters to/from Harriet and Katherine Cook in the Marjorie Caw papers (Series 29-31 and Series 44), and the papers of Edith Hübbe (nee Cook), which include 2 letters to Janet Cook (Series 8) and material on the Edith Hübbe and Harriet Cook endowment prize at the University of Adelaide (Series 16).

see also papers of Edith Hübbe (nee Cook), which include a summary of the inter-related family genealogies and those of the Hübbe family (Series 12)

60. Report by H.M. Bathurst on a Trip to Mandated Territory of New  Guinea and Territory of Papua 16 July to 11 August, 1941. 14p. typescript and accompanying photographs.

62. Papers, printed material and newspaper cuttings of uncertain  provenance (probably collected by Marjorie Caw), primarily by or  relating to members of the Hübbe/Caw families or on education. Includes prospectus of Mabel Hardy’s Stawell School for Girls at Mount  Lofty.    1929-72 and undated. 2 cm.