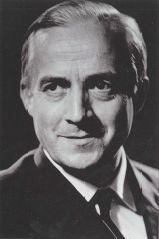 Born in Berri, South Australia, in 1924, Alan Treleven James was the youngest child of litigant and dried fruit merchant, Frederick Alexander James and Rachel May James. Alan James attended the Glen Osmond Primary School and later won the Samuel Fiddian scholarship to attend Prince Alfred College. In 1944 he completed a Bachelor of Science with Honours at the University of Adelaide and a Masters of Science in 1949.

Alan James' first professional job with CSIR, now CSIRO, included teaching throughout his early twenties at The University of Adelaide. During a posting to CSIR in Canberra he met a colleague, Cynthia, who would become is wife in 1950. Shortly afterwards, Alan James was awarded a CSIRO studentship to study at Princeton University, New Jersey, where he completed his PhD in 1952. Alan James and Cynthia returned to Adelaide and their first two children, Michael and Stephen, were born.

Alan James continued to work for CSIRO until 1958, when he resigned to take up a one year teaching position at Yale University in Connecticut. He progressed to full professorship and he and Cynthia had two more sons, Andrew and Nicholas.

In 1965, Alan James and his family returned to Adelaide again, where he took on the role of Chair of Mathematical Statistics at The University of Adelaide. Although he retired from the University in 1989, Alan James continued his research activities for many years. In fact, he was awarded the 1992 Pitman Medal of the Statistical Society of Australia in recognition of his outstanding achievement and contribution to statistics, particularly in the field of multivariate analysis. 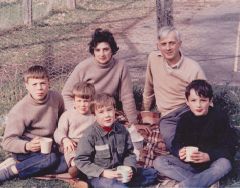 Alan James also loved to travel through the Australian outback and took his family on many adventurous car trips to Maree and beyond. On one trip, the family's station wagon would become stuck in floods south of Innamincka for a week. He also loved to make wine and to dry fruit, following in the footsteps of his father's profession.

Alan James was an active church-goer for most of his life and a member of the St John's Anglican Church since 1980. He served on the Parish Council and the boards of the St John's Youth Services and the Magdelene Centre.

In 2002, Alan James was diagnosed with cancer. Although ongoing treatments won him several years of remission, he died of a heart attack on 7th March 2013, after a period of deteriorating health.  He is survived by his wife, four children and nine grandchildren.

Alan James' publications include approximately forty research papers, those published in the Annals of Mathematics between 1954 and 1961, laying the foundation for much of his later work in multivariate analysis, as well as for the work of many others.

The papers of Alan James were donated to Rare Books and Special Collections by his wife, Cynthia James, in October 2013.

Frank Anscombe (1959-1984)
Re staffing matters at Yale University, including ‘Proposal for Development of the Department of Statistics'; copy of bibliography; 1965 photograph of Anthony, Frederick, Phyllis and Frankie Anscombe, 1959-1984

Joan Box (1974)
Comments re teaching of statistics; correspondence about her biography of R.A. Fisher

Robert Conyers (1979-1983)
Copies of four articles, including 'Some Thoughts on Evolution'

Art Dempster (1961-1973)
Re Alan James' potential employment at Harvard University and his address at Harvard Statistics Colloquium; request for recommendations of candidates for junior Statistics Department appointments at Harvard

David B. Duncan (1955-1975)
Re Alan James' potential visits to and employment in the U.S.A.; letters re Alan James' colloquium address on multivariate analysis

A.W.F. Edwards (1972)
Re funding for symposium talk, copy of contents page 'An Account of the Statistical Concept of Likelihood and its Application to Scientific Inference' for publication by Cambridge University Press

Joe Gani (1962-1988)
Re CSIRO review of its Division of Mathematics and Statistics; various letters re Alan James' possible employment at CSIRO

W. J. Hall (1971-1979)
Recommendations and lists of nominees and nominators for fellowship of The Institute of Mathematical Statistics

Hans Krebs (1982)
Obituary; article by Perutz about Krebs 'A Cycle Ride to Stockholm'

Frederick Mosteller (1963)
Re Alan James' invitation to serve the Institute of Mathematical Statistics (IMS) as Departmental Representative; invitation to address the IMS meeting at Harvard

Anne Parkhurst (1965-1973)
Copy of Alan James and Parkhurst article 'Zonal Polynomials of Order 1 Through 12'; letters and notes re tables of zonal polynomials

David Rivett (1950)
Re Pel Cornish and the future generally

Colin White (1963-1965)
Letter from Mrs Raymond Hopkins re future studies at Yale and possible employment; letter re holiday to Australia

Graham N. Wilkinson (1959-1980)
Curriculum vitae, list of publications and application for Senior Research Scientist CSIRO; referee report; submission for Dept. of Biometry at Waite Institute; seminar notes on statistical inference 'Was Fisher Right After All?'; notes re manuscript 'A General Recursive Procedure for Analysis of Variance'

Evan Williams (1965-2004)
Re Alan James' nomination for the International Statistical Institute; statement of reasons for establishing an independent Dept. of Statistics at Adelaide University; referee reports for William Venables and Robb Muirhead

2.2 Correspondence - Universities, societies and other organisations

The University of Adelaide

Flinders University (1971-1972)
Letter re Master of Science student, Keith Watkins; notification of Appointment Committee meeting for a Chair of Mathematics

International Statistical Institute (ISI) (1967-1975)
Congratulatory letter re election as ordinary member of the ISI; acknowledgement of I. Guttman's nomination as candidate of the ISI

Fisher Committee (1967-1981)
Correspondence re access to R. A. Fisher papers; re Adelaide University's entitlement to royalties arising from Fisher's publications; copy of agreement for permission to reprint Fisher's book 'Design of Experiments'

3.3 Talks/addresses (1960-1967)
Copy of valedictory address; presidential address; general statistics talks, including 'Statistics in the Sciences' and 'Statistics and Scientific Inference'

3.4 Research projects (1934-2008)
Emails, notes and calculations re maxillary advancement study with J.H. Barker; correspondence re Alan James' belief that R.A. Fisher shortchanged Constantine and the importance of his work at CSIRO; letters between R.A. Fisher and King's College Provost re Turing's dissertation; copies of 'Nasometer Pilot Study' and 'The Logit Transform to Decibels of Percentage Nasality in Speech' and associated data and calculations

3.5 General notes (1985?-)
Notes and comments on statistics, calculus and mathematics generally; notes and timetable re the 7th Magdeburg Colloquium on Mitochondrial Functions

4.2 Writings of other researchers (1952-1971, but most undated)
Conference papers and articles of other researchers, including 'Dispersion on a Sphere' by Ronald Fisher, 'Distribution of HLA Antigens in the Busselton Population' by B.R. Hawkins et al and 'Serum Urea and Uric Acid Values in the Adult Population of Busselton' by D. H. Cudrow and R.C. Bowyer