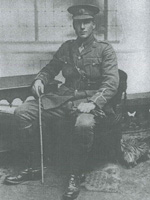 When WWI broke out, Chapman was working as an engineer for the Railways and Tramways Construction Branch of the NSW Public Works Department.  He returned to Adelaide to enlist on the 25th June 1915, initially as a Private in D Company, 3rd Depot Battalion, but was later promoted to Officer in the Engineers.  When he arrived in England in 1916, Chapman was transferred to the Royal Engineers (Imperial Service) and served at the front in 237th Coy, Royal Engineers, where he gained valuable experience in the applications of engineering and artillery in the context of battle.  On the 5th of January 1917, his 27th birthday, Chapman was shot in the neck.  He was fortunate, though.  The bullet narrowly missed his windpipe and he returned the following month to France, where he joined the 1st Field Survey Coy, Royal Engineers, who were deployed to the J Sound Ranging Section.  Sound ranging offered a new method for determining the coordinates of a hostile artillery battery and made it easier for allied artillery to target the German guns.

Chapman contributed a great deal to these advancements before transferring to the British 2nd Army Calibration Service as Captain in the 22nd Observation Group.  Here, he began work on a new method of calibrating artillery.  This was known as screen calibration, in which the line and range accuracy of a gun could be determined by its firing through a series of wire screens, each placed at known distances from the muzzle.  The elements of the flight of the projectile could then be calculated simply by recording the intervals of time between its passage through the screens.  Unlike previous calibration methods, where the sheer volume of artillery fired at reference points would alert the enemy to imminent battle, screen calibration ensured an element of surprise.  This method was used for the first time, and with great success¸ by the British 4th Army and Monash’s Australian Corps in the battle of Amiens which began on the 8th August 1918 and was the beginning of the “Hundred Days Offensive” leading to the end of the war.

After the war, Chapman returned to the NSW Public Works Department, rising through the ranks from Chief Engineer in 1924 to Commissioner for the South Australian Railways in 1947.  During his career there, Chapman was involved in many exciting projects, from the updating of railway stations and locomotive depots to the testing and rebuilding of bridges.  He oversaw the redevelopment of the Islington workshops and he travelled extensively throughout South Africa, Europe, Canada and America in order to learn more about the construction and maintenance of their rail networks.  He experienced post-war highs within the organisation, managing more than 3,000 men; he also experienced the lows of the Depression and saw his staff reduced by two thirds.  WWII, however, brought with it much work for the South Australian Railways.  The workforce was bolstered as the organisation took on contracts to manufacture ammunition, gun carriers and aircraft components, building new structures to accommodate these activities along the way.  Chapman, too, was at the height of his career and assumed the role of South Australian Railways Commissioner in 1947.

On the home front, however, it was a challenging time for Chapman.  His mother passed away in 1946, followed by his wife in 1947, and then, tragically, his brother and both of his sons died in 1948 when they were swept from the rocks near the Delamere coastline on the Fleurieu Peninsula.  Chapman was reported to have taken solace in his work at this time.

The papers listed below were collected by John Jenkin and deposited within the Library in 2015.

7. Published references
Correspondence and photocopied extracts from published works re Chapman and his background: