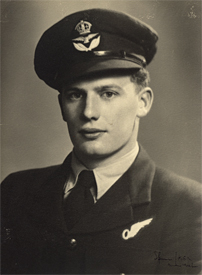 D.B. Kerr was born on June 27, 1919 at North Adelaide. He was educated at St Peter's College, Adelaide, and attended the University of Adelaide from 1937 to 1940 where he studied English Language and Literature and was awarded the John Howard Clark Scholarship.

A resident of St Mark's College, Kerr was active in student life including debating and rugby, representing the University in both. He was President of the Arts Association and edited the University magazine Phoenix, and, following its demise, founded the literary journal Angry Penguins, which later moved to Melbourne under the editorship of Max Harris.

Kerr enlisted in the R.A.A.F. before completing his University studies, and was called up shortly after graduation. He was killed in air operations near Buna, New Guinea, on December 15 1942, at the age of 23.

D.B. Kerr was a fine poet, described by some as "close to the borders of genius", and published many of his poems in Phoenix and Angry Penguins: D.B. Kerr, Max Harris, Paul Pfeiffer and Geoffrey Dutton being the four original Angry Penguins poets identified by Professor Charles Jury in 1940.

A posthumous collection of Kerr's poems was published in 1943 by the Hassell Press under the title Death, Be Not Proud, taken from his favourite poem by John Donne.

The University of Adelaide received these papers from the Kerr family in 2007 through the agency of Kerr's niece, Dr Heather Kerr. The greater part of the Lost Angry Penguin files were deposited by John Miles in November 2007.

Letter 21/1/1943 from Casualty Section, Dept of Air, South Yarra to Mrs M.J. Kerr with information regarding the circumstances of Kerr's death

Includes many of the poems selected for Death, Be Not Proud (published 1943), being those "which gave evidence of preparation for publication", and a Latin I translation exam sheet.

Newspaper clipping: review of Death be not proud, from the Advertiser(?), 1943

Typed review/introduction to reading of poems from Death, Be Not Proud [anonymous]

Tragedy in Relation to the Poetics

6.1 Photocopies of source materials re D.B. Kerr cited in Lost Angry Penguins, including: