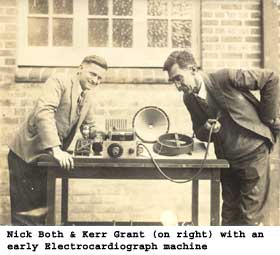 Kerr Grant graduated from the University of Melbourne (B.Sc 1900, M.Sc. 1903), where he developed his interest in physics under the teaching of Professor T.R. (later Sir Thomas) Lyle.  After teaching physics and mathematics at the Ballarat School of Mines and a year overseas, mainly at the University of Göttingen, he was appointed lecturer in Natural Philosophy at Melbourne University.  He came to the University of Adelaide in 1909 as a replacement for William Bragg while Bragg was on overseas leave, and on Bragg's resignation the following year to join the Royal Institution in London was appointed to the chair of Physics, a position he held until his retirement in 1948.

Kerr Grant quickly established a reputation as a teacher, his first year lectures most notable and remembered for their sometimes spectacular experiments and demonstrations and the end-of year recitation of Kipling's poem If, but all his teaching, from public (extension) to honours lectures conveying his understanding of and his endless curiosity and passion for his subject.  His infectious enthusiasm, wide-ranging interests and approachability also made him a favourite with the broader community: his public lectures were well-reported, his views on scientific advances regularly sought, and for some years he contributed regular articles on science to the Advertiser newspaper.  He was open to ideas whether on applications of science to problems in industry or the proposals of back-yard inventors (tactfully weeding out 'cranks' by suggestions that they proceed to construction of a working model), and had a long-running interest and involvement in sound and communication, spanning both invention of a new type of hooter to lecturing on wireless telegraphy and suggestions for the improvement of the acoustics of the University's Elder Hall.

Throughout his long career Kerr Grant remained interested in the advancement of his discipline on all fronts and was active in a wide range of general and specialist scientific bodies in addition to his University appointments, including CSIR, the Australian National Research Council, the South Australian School of Mines and the National Committee on Astronomy.  During the War of 1914-1918 he worked on applications of the vibrations caused by fluid jets, and in1922 he took (with the Government Astronomer G.F. Dodwell) a party to Cordillo Downs to observe the eclipse of the sun.  His work as a member and Chairman of the Scientific Instruments and Optical Panel of the Ministry of Munitions in World War II contributed significantly to the production of essential optical materials for the war effort and, with his long service at the University, earned him a knighthood in January 1947.

The Departmental/official papers in this collection remained in the Physics Department, where they were initially inventoried in 1983, until transferred to the custody of the University Archives in 1991.  The Archives transferred the personal papers of Kerr Grant, L.G. Huxley and J.H. Carver to Special Collections in 2001.  The personal papers comprising Series 22-34 were received from Colin Kerr Grant, the son of Professor Sir Kerr Grant, in 1990. See Series 35, The recording of “If”, was received from Graham Parslow in 2008. The 'Binocular cleaners' photograph was transferred from University Archives in 2016.

2. Miscellaneous papers relating to departmental administration, including timetables (1909-1926), schedule of application for position of lecturer on physics and electrical engineering (1909), papers relating to conditions of appointment, memoranda re departmental requirements; also re proposed establishment of a science discussion club (1912) and re Elder Hall acoustics (1930).  1908-1930 and undated. 3cm.

5. "Physics III 1934". Folder of course notes (ms. and roneoed) on the general course and on particular lecture topics. 4cm.

6. Certificates of Testing (of apparatus). c.1922-1948. 3cm.
[including Instructions for the Use and Care of Ray Track Apparatus]

7. Barr Smith Library: correspondence of Kerr Grant with the Librarian regarding purchases, overdue and lost books, access by visiting scientists and other library matters. 1936-1947. 2cm.

8. Reports, memoranda and circular correspondence of the Anti-Cancer Campaign Committee and its Physics Committee, reports on Radiotherapy Department, and papers (published and roneoed) on cancer research. 1935-1948. 4cm.

9/2.  Hostels Committee. Correspondence of Kerr Grant as the Chairman, re accommodation for a hostel for University and School of Mines students. 1946. 1cm.

9/6. "Geology". Memorandum by Douglas Mawson on Housing of the Department. 1944. [Constitutes an historical summary of the teaching of geology at the University] 1cm.

10. Correspondence of Kerr Grant with the Secretary and other members of C.S.I.R. on the work of the Council. 1938-1948. 4cm.
[includes confidential letter of Rivett 1948 on the future of CSIR]

12. C.S.I.R. S.A. State Committee. Minutes, Jan. 1943-Nov. 1948 and correspondence 1941-1948. 2cm.
[Mostly received by Kerr Grant as Chairman/Secretary/member of the State Committee. Also copies of Ore-dressing Investigations (joint investigations of the CSIR and the S.A. School of Mines and Industries) and correspondence with Kym Bonython 1948 on the rabbit pest problem]

15. Papers re enquiry into the administration of the Department of Meteorology.
1945-1947. 3cm.
[The enquiry followed RAAF air accidents, alleged by H.M. Treloar to have been caused indirectly by the inadequate provisions by the Director H.N. Warren for an Air Mass Frontal Analysis section. Kerr Grant was a member of the Committee of Enquiry with J.D.G. Medley (Melbourne University) and Professor A.V. Vonwiller (Sydney University). There was subsequent correspondence following the demotion of H.M. Treloar]

16. Correspondence of Kerr Grant with the Secretary (E.L. Sayce/H.R. Carne)
1943-1948. 2cm
[Includes correspondence re proposed Chair of Geophysics at an Australian university; invitation to membership of the National Committee on Astronomy); calendar reform and currency decimalisation proposals]

18. "Commonwealth Observatory, Mt. Stromlo." Minutes, agendas, notices of meetings of the International Astronomical Union (1948), Board of Visitors (1945-48), National Committee on Astronomy (1947) and Advisory Board of the Committee, and related correspondence with the Commonwealth Astronomer R. Woolley.
1940, 1944-1948. 2cm.

27. Lecture notes, reprints and articles. 1910-1947 and undated. 5cm.
Unpublished material includes some public lectures 1910-1920, obituary of Thorburn Brailsford Robertson; typescript and galley proof of obituary notice of Thomas Ranken Lyle for the Royal Society 1944, with letters re Lyle from Mrs Hanna; undated typescript lecture on space travel; confidential notes re proposal for defence against enemy aircraft by use of projected vortices, and extracts from articles on vortices (undated 15 p. typescript); and "Secret" Paper on Klystrons, with related drawings and papers 'The Convertor Unit and Crystals' and 'Conversion loss and noise measurement' (undated, c1944).
Also copy of Kerr Grant's Lectures on Physics (1934 printing) interleaved with ms annotated blank pages, prepared for a future revised edition, plus unannotated copy
The published items comprise
- issues of Nature 1931, 1937 and 1939 containing articles by Kerr Grant
- reprints of scientific papers
- articles in The Australian Amateur Minerologist (December 1955) and The Bulletin of the Astronomical Society of SA (April 1965) re the finding of the Karoondah Meteorite, with 1931 thank you from the British Museum of Natural History re Kerr Grant's gift of meteor fragments
- a number of general addresses on science (including 'Zeta ... the veto on war?' re generation of power from nuclear fusion, The Australian Journal, March 1958)
- article 'Paris to Rome by Bicycle' re Kerr Grant's 1904 trip (Focus, July 1959)
- the obituary of T.R. Lyle,a  tribute to G.R. Fuller and the 1950 memorial lecture on William Bragg
- Efficient reading: an approach to improving techniques / Wing-Commander A.L. Greenaway (University of Melbourne Extension Committee, ca 1959)
- University of Adelaide. Conversazione in honour of the state centenary celebrations and of the sixtieth anniversary of the foundation of the University. Friday August 28 and Saturday August 29 (Hassell Press, 1936)
- University of Adelaide. Dept of Physics. Conversazione: exhibition of apparatus and demonstrations in physics. Saturday 21st December, 1946

28. Copy of applications for the Australian patent on Electrostatic Voltmeter or Oscillograph (undated) and provisional specification for 'Improvements in Means for Synchronisation at a Distance': application number 34738, December 1927. 1cm.
[also miscellaneous (unrelated) blueprints and calculations]

30. Notebooks.  undated but entries in some suggest c1916, 1930s, 1953, 1957. 8v.
[Contain variously notes for talks and on apparatus, experiments, references to books and articles; one has 'Headings and notes for lectures to Honours students 1953' and another includes lecture notes 1956 with other extracts and notes made 1956-1957.  Volume 8 is possibly not that of Kerr Grant but rather used for medical/case notes by his son Colin Kerr Grant]
See also visit to South Africa 1952, Series 25