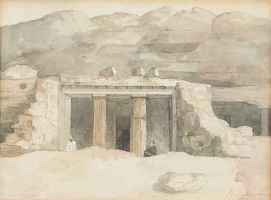 William Light was the son of the English seaman and seatrader, Francis Light of Penang, and Martinha Rozells, the daughter of a female of the royal court of Kedah and a resident Portuguese. He lived in Penang until age of 6 and was then educated in England with his father's friends, George and Anne Doughty of the village of Theberton.

Light entered the Navy at age of 14 and served in various military positions during the Napoleonic wars, at times serving under General Arthur Wellesley (later Wellington). After the conclusion of the Wars, Light spent much of his time on leave in Europe. In 1824 he married his second wife, Mary Bennet, an illegitimate daughter of the Duke of Richmond (the fate of Light's first wife being unknown). Light had no financial expectations but Mary had inherited a small fortune. For the next few years they toured Europe and the Mediterranean, eventually reaching Egypt in December 1830.

Both Light and his wife fell under the spell of the ancient monuments, Light making numerous sketches and Mary studying Egyptology. Light became friendly with Mohammed Ali, the Pasha of Egypt, who issued the couple with a special pass to ensure them safe conduct on their three month trip of nearly 1,600 kilometres up the Nile. 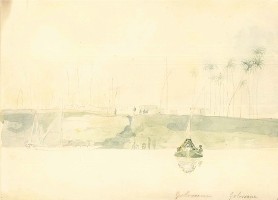 Later in 1831 Light travelled to England to try and recruit seamen for the Egyptian Navy. During his absence Mary left Light for Hugh Bowen, and Light returned to England before again sailing for Egypt in command of the Nile along with Captain John Hindmarsh. Light gave Hindmarsh a letter of introduction to Colonel Charles Napier, Governor-designate of the projected colony of South Australia. On hearing that Napier was no longer interested in the position, Hindmarsh dashed to London and actively lobbied for the position. Napier wrote to the authorities urging that the Light be given the post but Hindmarsh had already been promised the Governorship. Light returned to England in January 1836 to accept the position of the first surveyor-general of South Australia.

Light was responsible for deciding the site of Adelaide and laying it out in new planning principles with a surrounding belt of parklands. He endured much criticism from local fighting factions and from London, resigning in 1838 but continuing to work privately. Governor Hindmarsh and his faction had attempted to relocate the site of Adelaide, but time has proved Light's choice to be correct.

Light's health declined rapidly due to tuberculosis, from which he would die in 1839 at the age of 54. Light's marriage to Mary was never dissolved. He was faithfully nursed by his companion, Maria Gandy, who had travelled with him from England and to whom he left his possessions, including his papers and sketches. Although shunned by society due to her mixed race background and relationship with Light, Maria married Dr George Mayo a few years later and bore 4 children before her death in 1847. 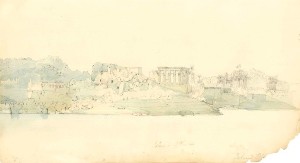 Light kept a journal throughout his life, and sketched and produced watercolours of places he visited. In 1818 Light went to Sicily where he made a series of sketches which were reproduced as engravings and published as his Sicilian Scenery 1823. Only a small portion of probably thousands of sketches survive as the majority were destroyed when his hut caught fire in January 1839, but Light continued to sketch even during his last painful illness

These sketches and watercolours of Light's journey down the Nile were donated in June 2013 on behalf of the Mayo family by John and Oliver Mayo, great-great grandsons of Maria Gandy, William Light's companion.

The Mayo family donated Light's papers and many sketches to the State Library of SA, while further Light paintings are held by the City of Adelaide.

14 watercolours and pencil sketches, most with green wash and inscriptions in Light's and other hands.