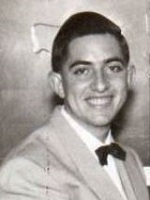 The son of Bartolomeo Locantro and Olga Jones, Tony Locantro was born in Kensington, Sydney, in 1937.  His mother and grandfather, Sid Jones, were passionate about theatre and movies, including such early Australian productions as The Arcadians and The Mikado, from which they would sing all the popular songs.  As a child, Tony shared in this musical interest, playing the piano and gigging in a dance band during the 1950s whilst still at school at the Marist Brothers College, Randwick.  He also played piano to accompany the school choir, including at the Eisteddfords, and in 1953 became Dux of the College.

In 1954 Tony commenced a Science degree at Sydney University but continued his musical pursuits, playing for shows at the Randwick Catholic Youth Organisation.  His dance band also flourished and they played for weddings, birthdays and dances in local halls and private homes.  Tony also played for three University revues in 1957, 1958 and 1959, plus HMS Pinafore and Victoriana, and worked with actors, writers and directors such as Clive James, Leo Schofield, Peter Kenna and Philip Hedley, among others.

In 1960 Tony left Sydney for London onboard the Fairsky.  To pass the time, he and his fellow passengers, including dance critic Alan Brissenden, put on a revue.  When they arrived, Philp Hedley introduced Tony to London theatre.  Whilst attending performances, he initially earned a living as a lounge pianist but soon found work as an Accounts Clerk at EMI Records, where he became acquainted with producers Norman Newell, George Martin, Wally Ridley and Norrie Paramor.  By 1962 he had earned a position in marketing on the pop side of the company, and just a few years later moved to the International Classical Division of parent company EMI Ltd, eventually taking responsibility for its financial planning, royalty accounting and licensing.  Tony retired from EMI in 1991 but continued to work from home as a compilation producer, turning out popular programmes in series such as Classics for Pleasure and a four-CD compilation called From Melba to Sutherland – a compendium featuring 80 Australian singers on record since 1898. Over the years, Tony attended countless performances in London, particularly at the Royal Opera House, Covent Garden.  He saw operas with the great Maria Callas and Tito Gobbi; ballet with Margot Fonteyn and Rudolf Nureyev, and plays such as Romeo and Juliet with Judi Dench and John Stride.  Of musicals, in the 160s, he remembered enjoying: “The Sound of Music, Flower Drum Song, Irma La Douce, Lock Up Your Daughters, Once Upon a Mattress, Oliver!, Maggie May, Sail Away, Follow That Girl, Bye Bye Birdie, She Loves Me, Mame, Sweet Charity.”

While still working for EMI, Tony began an association with the Theatre Royal, Stratford East, and its famous director Joan Littlewood, playing for variety shows and also sing-along entertainment in the theatre bar.  Tony’s involvement has extended to numerous small theatre companies in and around London, including such places as The Tramshed at Woolwich Arsenal, Chats Palace at Hackney and the Pindar of Wakefield - a pub at King’s Cross, working for companies like Aba Daba (of which he was resident musical director), Hiss and Boo, Song and Supper and Gaslight and Garters. Shows regularly featured famous old performers, such as Adelaide Hall, Tommy Trinder, Sandy Powell, Reg Dixon, Sid Marks, Sid Wright, current stars like Wayne Sleep, Leslie Crowther, Roy Hudd, Brian Murphy and Barbara Windsor, and other young actors, including Ruth Madoc, Nigel Planer, Brian Protheroe, Sam Kelly and Marcia Warren, who went on to have very successful entertainment careers.

During his travels, Tony amassed an enormous collection of programmes. Ballet, Film, Gilbert & Sullivan, Music, Musicals, Opera, Pantomime and Theatre performance are all represented in the collection he donated to the Library in July 1993.

He also wrote hundreds of London performance reviews, many of them for TheatreMonkey. These reviews are available for viewing on request.

Tony’s collection of programmes has been sorted and listed by Rare Books & Manuscripts’ volunteer, Margaret Harrison.