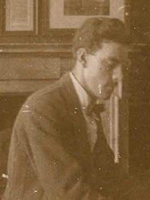 William Lovelock was born on 13 March 1899 at Kennington Park, London. He attended Emanuel School, Battersea, and started learning to play the organ when he was 12. At 16 he won an organ scholarship to Trinity College of Music. After serving as an artilleryman on the Western Front in World War I, he taught at Trinity from 1919 and also studied composition at the University of London (B.Mus., 1922; D.Mus., 1932). In 1923-26 he was private organist to the first Viscountess Cowdray, a well-paid post that involved organising the summer musical entertainment at the Cowdray estate in Scotland.

A fellow of Trinity College and of the Royal College of Organists, in the following years Lovelock worked as a music teacher and examiner for both the college and the University of London and wrote his first music textbook. At the outbreak of World War II he was stranded in India, examining for Trinity, while his wife and son remained in England. Commissioned in the Indian Army in March 1942, he rose to temporary major in the Ordnance Corps. He wrote a concerto for piano and orchestra while stationed at Benares. Back in Britain in 1946, he rejoined the staff of Trinity College and produced more music textbooks, including A Concise History of Music (1953), and the perennial The Rudiments of Music (1957). In 1954-56 he was dean of the faculty of music, University of London.

In 1956 Lovelock was appointed founding director of the Queensland Conservatorium of Music. He found the Department of Education an unsympathetic employer and in 1959 he declined to accept re-appointment. Choosing to stay in Brisbane, he became the chief music critic for the Courier-Mail, an adjudicator at numerous eisteddfods and an examiner for Trinity College, and a senior and influential examiner for the Australian Music Examinations Board.

Lovelock then intensified his output as a composer, ranging from teaching pieces for children to full-scale orchestral, choral, brass, and military band works, including concertos for piano, wind instruments, harp, and organ, remaining attached to the pre-war, neo-Romantic genre of British composers such as Geehl. His style was invariably melodious and harmonically conservative, for he wrote 'simply to entertain', and his moods focused on the light-hearted, the outgoing, the idyllic, or the energetic. His structures were usually framed by learned forms, such as sonatas, fugues, or concertantes, but he wished 'to write for the performers, rather than against them', and his scores were polished and technically well-crafted for their instruments.

After the death of his wife in December 1981, Lovelock returned to England.  Survived by his son, he died on 26 June 1986 at Shipston-on-Stour, Warwickshire.

The following scores were transferred from the Elder Music Library Collection in 2017-18.