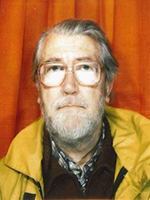 Kevin Magarey was born on 18 November 1925 in Norwood in Adelaide, South Australia, to Rupert and Elsie (nee Cowell) Magarey. Kevin was educated at St Peter’s College until he quit in 1943 at the age of 17 to enlist in the Australian Navy. Following the War, he studied a Bachelor of Arts at the University of Adelaide from 1947-49. With the support of the Women’s League and by voting for himself, he defeated Don Dunstan to become president of the Student Representative Council. While at University, Kevin became a Catholic, to the shock of his Baptist family.

His continued his studies at Magdalen College, Oxford University, where he studied under C.S. Lewis and also met J.R.R. Tolkien, Evelyn Waugh and other luminaries. He was awarded an Honours degree in 1954 and a Master of Arts in 1957. During his time at Oxford Kevin considered joining a religious order in Italy and also became stranded and destitute in Goa, India, after having gone there to see the remains of St Francis Xavier. His family telegraphed him money to return home but instead he embarked for South Africa where he was appointed a lecturer at the University of Cape Town. Kevin also taught for six months at Pius XII University College in Lesotho, where he met his future wife, Margaret.

In 1960 he was appointed lecturer in English at the University of Adelaide, where he enjoyed teaching Arthurian legend and Chaucer became an authority on Shakespeare and on African and Australian literature. Magarey progressed senior lecturer and retired in 1990. He was also the founding co-editor of the multi-disciplinary journal Southern Review, a position he held for 13 years from 1963 to 1976.

While at the University, Kevin met a South Sudanese refugee called Mariano Ngor who was working as a security guard. Through this friendship, he joined others in setting up the North Africa Interest Group of Community Aid Abroad. From the early 1980s for well over a decade, the group lobbied and met with foreign ministers, inspired churches to adopt of the cause of the south Sudanese and successfully petitioned the ALP to support South Sudanese self-determination. In 2011 South Sudan became an independent state and in 2012 Mariano was appointed South Sudanese ambassador to Kenya.

Kevin, with his wife Margaret, were founding members of the Newman Association and Teams of Our Lady in the 1960s and maintained his deeply intellectual commitment to Catholicism throughout his adult life. In his later years he developed vascular dementia and passed away on 8 June 2017.

The Papers were initially donated to the State Library of SA in 2008 and transferred to the University of Adelaide Library in 2009. Additional records were donated in 2016 by Magarey’s family.

1.1. Letter from Magarey to his parents from HMAS Warrnambool September 1945

Letters between Magarey and others while at Oxford ca 1952-60, plus essay on Wordsworth

Set up by Kevin and Mariano Moore. Housed in folders as organised by Magarey

Note: some folders on general CAA matters and other groups were disposed of due to mould, and material rehoused and mouldy folders disposed of

Papers towards a proposed publication of autobiography and other books by Tur suitable for use in primary schools, which was not published due to her illness

Aunty Mona Ngitji Ngitji Tur was born in 1936 at Hamilton Bore, about 100kms from Oodnadatta, north-west South Australia. Ngitji Ngijti was her Anangu name meaning Cicada. She served as a distinguished cultural educator, oral linguist and interpreter who has worked in all three Adelaide universities, and as a cultural broker for Aboriginal women in South Australia who have been members of the Stolen Generation. She was also the first Aboriginal Artist in Residence with Carclew Youth Performing Arts Centre, performing in numerous schools teaching children about Anangu culture, storytelling, song and dance.