Each item in the series consists of draft texts, illustrations and correspondence relating to the publication of four out of 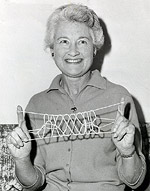 Honor Maude's six monographs on Oceanic String Figures, of which Item 1 was published by the Libraries Board of South Australia and the remainder by the Homa Press of Canberra, founded and owned by herself.
[this note relates to the first five files; other material was received subsequently]

5.  Photocopies: ‘The String figures of Yirrkalla: a major revision’ / collected by Frederick D. McCarthy, 1948; revised and illustrated by Honor C. Maude and Mark A. Sherman. Bulletin of the International String Figure Association v. 2 1995, and Mark A. Sherman ‘Reconstructed methods for the Jayne and Garcia figures: Appendix III for H.C. Maude’s The String Figures of Nauru Island (second edition)

8. Draft of article on String figures for the Encyclopedia of Oceania [prepared 1996]

12. Board of string figures     Outsize item [against wall of Strongroom]

13. Items relating to Pacific handicrafts: hibiscus bark made by Honor at Beru; coconut string; cards made of tapa cloth; ticket for items sold through Handicraft Society.