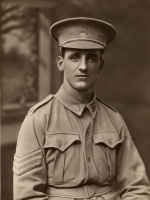 He was wounded and killed in action in Pozieres, Somme Sector, France, on the 6th of August 1916.

Diary. Illustrated. 1v.
Diary contains inscription in front: "This is the forest diary of the Late Ronald George McKail, who was the first graduate of Adelaide University in forestry. Ronald George McKail fell in action in France after having served in the Australian Expeditionary Forces in Egypt, etc."