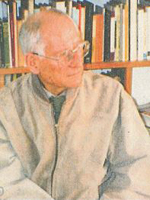 Douglas worked at the University of Adelaide as a lecturer in English Language and Literature, from 1st September 1950 until 31st January 1955. He was later an Honorary Visiting Research Fellow (English), appointed from 28th November 1984 until 27th November 1989. Douglas also worked in the English departments of Newcastle University College and Monash University. He was a Fellow of the Humanities Research Centre, Australian National University.

Amongst his published works are his books on irony - The Compass of Irony (London: Methuen, 1969) and Irony (London: Methuen, 1970). He also collaborated with Barbara Wall on the work of poet Charles Rischbieth Jury (1893-1958). He wrote the introduction for The Sun in Servitude and Other Plays by C. R. Jury (Melbourne: F. W. Cheshire, 1961) and co-edited with Wall Well Measur'd Song: Quantitative and Quasiquantitative Verse in English (Melbourne: Cheshire, 1968) and later A Dweller on Delos: Selected Poems and Prose (Magill, S. Aust.: Friends of Charles Rischbieth Jury, 1993). They also edited together The Emperor's Doorkeeper: Occasional Addresses by John Jefferson Bray (Adelaide: University of Adelaide Foundation, 1988), Chancellor of the University of Adelaide from 1968 to 1983.

A poet and literary critic, Douglas also wrote plays for the stage and radio. His Almost Posthumous: Late Picked Poems (Newtown, N.S.W.: S. Muecke) was published in 2010. A video of Douglas reading his poetry is available at https://www.youtube.com/watch?v=233--BHPWzU

This collection was donated to Rare Books & Special Collections by his close friend Barbara Wall in October 2016.

Translation of Em and Moy, translated from the French by Douglas Muecke, typescript, 22 leaves.

Some poems as attachments, undated.

Newspaper clipping from The Adelaide Review, October 1997, featuring Douglas's poem Give us this Day our Dailies' Bread.

Handwritten letters sent from Barbara Wall to Douglas while employed at the University of Adelaide and following his departure in 1955.

Includes a letter informing Douglas of poet Charles Rischbieth Jury's passing on 22 August 1958. Barbara was the literary executor for Jury. Correspondence between Barbara and Douglas regarding Jury on the sale of his book collection, dispersal of his papers and letters, and the publication of his work.

Includes letter dated July 12 1960 in which Barbara asks Douglas to write an introduction for a book on Jury's work - The Sun in Servitude and Other Plays by C. R. Jury (Melbourne: F. W. Cheshire, 1961).

Further correspondence about the publication of The Sun in Servitude and Other Plays, how it has been received, and some errors Barbara has discovered following its publication.

Discussion on another publication Barbara and Douglas were working on regarding Charles Jury - Well Measur'd Song: Quantitative and Quasiquantitative Verse in English (Melbourne: Cheshire, 1968).

Thoughts and feedback on Douglas's work on irony.

Comment on what Barbara has been reading, plays attended, her teaching work, her productions of plays, and other personal correspondence.

Correspondence concerning Charles Jury: dispersal of his papers and publication of Well Measur'd Song: Quantitative and Quasiquantitative Verse in English - writing the introduction, choosing a publisher, number of copies to print, how to reduce costs, editorial decisions, and checking of the typescript.

Includes an invitation addressed to Dear Graduate from the Adelaide University Graduate's Union, dated 5 July 1973, to reunion dinner for those who took out their degrees in 1948, 1947 or 1946. Includes photograph printed on the invitation of the Inter-Varsity Hockey Team 1947, including Barbara.

Discussion on her 'Notes on Emma' (Jane Austen).

Discussion of her reading, plays attended, and teaching work including a school production held at the Glenelg Cinema Centre in 1973.

Includes letter of sympathy, dated Sept. 5th 1972, sent to Douglas and his children, on the passing of his wife, Audrey.

Comment on Douglas receiving the D.Litt. from the University of Adelaide in 1976.

Her teaching work, learning Latin, learning and teaching chess, school activities including the School Carnival, and her attendance at the CAE (College of Advanced Education) Conference in Tasmania in 1975. Her enrolment as a PhD student at Flinders University in 1981.

Some pre-publication discussion on her book The Narrator's Voice: the Dilemma of Children's Fiction (1991) and her dealings with the publisher Macmillan.

Her reading and plays attended.