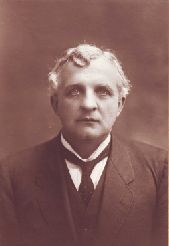 Henry Darnley Naylor (1872-1945) was born on 21 February 1872 at Scarborough, Yorkshire, England. He was educated at St Peter's School, York, and at Trinity College, Cambridge, where he gained a first class in the classical Tripos in 1894 and the Walker prize. He also distinguished himself as a footballer and a mountaineer.

Naylor's natural charm was heightened by his voice and diction, by his humour, cheerfulness and friendliness, and by his wide interests, including music and the literature and history of England, France and Italy, as well as of the classical world (he knew five modern languages). An uncommonly stimulating teacher, he left a lifelong mark on his students, morally and socially as well as intellectually. He was also a founder and president of the South Australian Amateur Football League.

His specialist interests were Euripides, Horace, and Latin word order. He contributed frequently to the Classical Review and the Classical Quarterly as well as to the Encyclopaedia Britannica (1929).

On the creation of the League of Nations Naylor perhaps did more than anyone to make Australians aware of its existence, purpose and activities. At the time he was active as a member of the council of the University of Adelaide, as the founding chairman of Scotch College, Adelaide, as chairman of the Workers' Educational Association, and, soon, as a member of the council of St Mark's College, but the League of Nations Union, which he founded and guided in South Australia, took up a part of every day.

In 1927 Naylor retired to Cumberland in England to give his time mainly to public affairs, particularly the League of Nations Union. In 1929 he stood, unsuccessfully, as a Liberal Party candidate for Whitehaven. Naylor died on 8 December 1945 at Cockermouth, Cumberland.

Biographical note extracted and adapted from the Australian Dictionary of Biography entry by W.R. Crocker.

These papers were presented to the Library by his daughter, Miss Margaret Mary Darnley Naylor in 1972.

Anthropology, the mother of the muses. Delivered July 20th 1922. Handwritten [23] leaves (A5) + 8 leaves notes.
Discusses values of ethnology and comparative philology, with Classical references; also promotes the study of anthropology in Papua New Guinea and the establishment of a Chair of Anthropology at the University of Adelaide.

Why I read Horace. Handwritten, notes for a lecture. [8] leaves (A5)

Sketch of a Latin translation of Gray's Elegy.