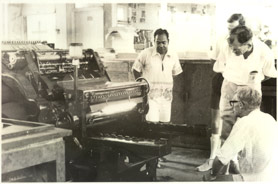 Born in Unley, South Australia, on 3 September 1914 Frank was the only son of Capt. Michael Nelson who was killed in action in France in 1918. He was educated at Unley High School and apprenticed at the age of 16 to the S.A.Government Printer. When the Second World War broke out, Frank spent a short period at Duntroon before enlisting in the 2/24 Battalion. As Lieut. Nelson he served in the North Africa campaign and in October 1942 was wounded at El Alamein. A year later, serving with the Pioneer Battalion he was hurt in the landing at Finschhafen in New Guinea. Invalided out of the Army, he was glad to return to his old trade of linotype operator with the Government Printer. For many years he was responsible for setting the Parliamentary Debates (Hansard) and the various Government Gazettes. He retired in September 1974 at the age of 60, and in October of that year, accompanied by his wife, Jane and young son, Michael (the godson of Bishop John Chisholm referred to in the letters) set out for Honiara in the British Solomon Islands Protectorate to take up the position of Advisor in Printing and Publications to the Melanesian Mission Press in the Anglican diocese of Melanesia. This Press was soon to be renamed the Provincial Press. In February 1975, Frank was licensed by the Archbishop as a lay worker in the newly constituted ecclesiastical Province of Melanesia.

In South Australia Frank had been for a number of years the President of the Government Printing Department Association and was a vocal advocate for Government employees to both Union and Management.  Denied the opportunity to manage in South Australia, he used his years in Honiara to implement his strongly held views concerning the right of tradespeople to a voice in the management of their workplace. His consensus style struck a chord with the predominantly Melanesian staff. As a result, he was able to introduce many technical innovations and increase the efficiency of the Press, turning it into a profitable business for the Church.

Gregarious, egalitarian and a Master Printer, he possessed virtually every skill of his trade. Prior to his appointment, he had undertaken a course in what was then the new field of offset printing.  But it was his expertise on the old hot metal presses, still in use in Honiara that won for the Provincial Press the contract to print the Government newspaper The Solomons News Drum. It was typical of his style that each week when the paper was finally put to bed, he was with his men in the printery. When the last paper rolled off the presses, often late into the night, he helped load the papers onto the Press truck and delivered them to town outlets, to Government House and to Solomon Islands Airways for distribution to the outlying islands.

In December 1976, Frank returned with his family to Adelaide; always a voracious and retentive reader, as befits a printer, there he resumed an active life playing and coaching various sports. After suffering a stroke in July 1995, he died in a nursing home in Adelaide on 10 October 2001 at the age of 87.

This biographical note was provided by Jane Nelson.

1. Correspondence with J.W. Chisholm (Bishop and Archbishop of Melanesia), Norman Palmer (Archbishop of Melanesia) and David Hastings, Diocesan printer, regarding Nelson's appointment as Advisor to the Provincial Press, the work of the Press and diocesan affairs generally, 1972-76.  11 letters and 3 other documents (photocopies of originals in the possession of Mrs Jane Nelson).
[file includes article on Chisholm's appointment as Bishop c1967, Nelson's licence as a lay worker (Advisor in Printing and Publishing) in the Diocese of Central Melanesia 25 February 1975, and photograph of Nelson at the Press, with Sir Donald Luddington, Governor of Papua New Guinea, and Henry Wood]

2. Examples of Press printing, including issues of Melanesia Today no.1 1973 (with articles on the re-named Provincial Press and on C.E. Fox) and Easter 1975, Church of Melanesia Monthly newsletter November 1977 and undated pamphlet on Work in Printing, Publishing, Bookselling at the Provincial Press.  4 items.

These papers were donated to the Barr Smith Library by Mrs Jane Nelson in April 2003.  Issues of The Solomons News Drum (trial edition October 1975 and, vol.1 no.1 -  no.141, incomplete) were also donated by Mrs Nelson and have been added to existing holdings of the journal at Pacific/E 05 N557