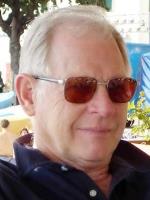 Emeritus Professor Bob Nesbitt is a petrologist-geochemist. Over the last 50 years he has worked and published on layered ultra basic- basic intrusions of Central Australia , komatiites and Ni deposits in Western Australia, U-Pb dating of zircons in Zimbabwe and Spain, plus a range of analytical techniques, especially XRF and laser ablation ICPMS .

The Giles Complex is an iconic geological province covering the junction of South Australia, Western Australia and the Northern Territory. The site was explored by Regg Sprigg and his colleagues in the 1950s as part of a mining company (Southwestern Mining) evaluation of its mineral potential.

In 1963 the area, being a remote and scientifically challenging geological province, provided an exciting challenge to a small University of Adelaide group. Several years of field studies, petrological, mineralogical and geochemical research were undertaken by Bob Nesbitt, his colleagues and post-graduate students in the Department of Geology and Mineralogy. The results were summarized in post-graduate research theses, reported at National and International conferences, and published widely in scientific journals. The theses and rock samples collected over the many field seasons, together with the respective thin and polished sections for petrographic study, are archived in the Mawson Collection in the Mawson Building.

Transferred from the University of Adelaide Geology Department 20/3/2018

1.3   Folder of Location maps for Giles