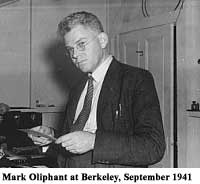 The collection comprises correspondence, speeches, articles, personal documents and working papers, photographs, newspaper cuttings, awards and degree certificates of Sir Mark Oliphant, and copies of papers by other scientists and academics; also notebooks, reprints and correspondence of Lord Rutherford and articles about him collected by Oliphant for Rutherford Recollections.

The papers cover the period 1927-1999 and include some records relating to Oliphant's period at Cambridge and his war-time work on radar, but principally document his career as Director of the School of Physical Sciences, A.N.U. (1950-1963), as Governor of South Australia (1971-1976) and subsequent to his retirement from public office.

The papers were donated to the Barr Smith Library by Sir Mark in March 1984. Access to some of the material (mainly confidential references and letters sent in confidence to Sir Mark by others) is at the discretion of the Librarian. These files or papers are identified in the following list as RESTRICTED.

Additional papers were donated after Sir Mark's death by his daughter Vivian Wilson.  These comprised correspondence, speeches and addresses, largely dating from 1984 but also including some earlier material retained by Sir Mark after depositing the original collection.  The correspondence kept chronologically has been added to Series 2; that arranged into subject files has been integrated into the original Series 3, while files containing speeches and addresses have been added to Series 4.
In May 2003 Dr Len Hibbard donated some valuable additional material relating to the Homopolar generator and his own research on its construction.
See Series 25
In 2008 Monica Oliphant donated the files compiled by Stewart Cockburn relating to the biography Oliphant, The Life and Times of Sir Mark Oliphant, by Stewart Cockburn and David Ellyard (Axiom Books, 1981.
See Series 26

Conditions for Use of the Sir Marcus Oliphant Papers

When depositing his papers with the University of Adelaide in 1984, Sir Mark Oliphant placed a formal restriction only on his correspondence with Sir Walter Crocker, leaving the control of access to all other material to the discretion of the Archivist (D.2495/83).

To enable the widest access to these papers for research purposes while guarding against possible actions for breach of confidence, defamation or infringement of copyright, the following conditions of use have been formulated.

Restrictions
Some files or items from Series 2 and Series 3 have been restricted. In general only confidential references and reports and correspondence between Sir Mark and others of an intensely personal nature or with comments on a third party or parties detrimental to their reputation or potentially actionable at law, has been thus restricted. In general such material will be closed until 12 months after the deaths of the parties concerned.
These files are clearly indicated in the Special List.  A summary description of the items restricted can be made available upon request if appropriate notice is given.

Copying and Publication
The University does not own copyright in the Oliphant Papers. Copying of individual items for researchers (except those closed or restricted) will be undertaken as far as is consistent with the provisions of the Copyright Act Amendment Act 1981, and where the record will not be damaged by such copying. Copying of copyright material by the University for a researcher, and publication or further reproduction of any item by the researcher or another person can be undertaken only in accordance with the relevant provisions of the Copyright Act and/or the authorisation of the appropriate copyright holder.

Series 3.  Correspondence files.  1953-1999. 5 m.
[Received initially in two alphabetical sequences, a formal file registration system covering the period 1953-1975 (subdivided c.1965 into 'old' and 'current' files for administrative convenience by Oliphant's secretary), and an informal series of titled and untitled files for 1975-1983. Further files were received after Sir Mark's death from his daughter, some created entirely after 1983 but others of earlier date that had been retained by Sir Mark on the initial transfer of his papers.  These have now been integrated in the interests of research access. The original lists of the registered files created during the ANU years are filed at the beginning of the series - note that only the files underlined in those lists were received by the University of Adelaide in 1983.
See the Series 3 list of file titles received in all transfers to 2000

Series 4.  Speeches and addresses. 1954-1994.  4 m.
[Arranged chronologically. Until 1975 and from 1984-88 the speeches are largely in individual titled files detailing the date and purpose of the address.  Series 2 includes correspondence relating to many other invitations to speak and the Series 3 files include papers relating to other lectures.
See also Sound Recordings (Series 19) and Publications and reprints (Series 21)

Photographs of the Birmingham proton synchrotron are available via the Adelaide Research & Scholarship digital repository.

Series 9.  Typescript of Oliphant's doctoral thesis 'The Cathode Region of the Glow and Arc discharges of electricity through gases'.  Aug. 1930. 1v.

Series 10.  Laboratory notebooks c1930-1970.   v.
Physics Lecture Notes {mainly lectures given at Cambridge} c.1930-1936, 1947 and undated.
Cavendish Laboratory - at front Abstracts (date span October 1932-1937) and at rear Notes of experiments November 1933-[1934?].
Untitled {Birmingham}15 May 1945 -April? 1946 re construction of cyclotron, examination of various requirements and tentative specifications; in back, draft of letter to professor R. Peierls and to Mr. Warren, BTH, re equipment associated with the accelerator; and notes on Atomic Energy and its application to medicine and biology [start of a lecture?]
'HPG [Switchgear?] - Brushes'  - notes and calculations 1962-1963.
'Mercury or NaK'  - notes and calculations 1963.
'Magnet' - notes and calculations - possibly also 1962-1963 but with 'Mark III' additional notes 1970.
[Exercise book] 'Misc. Charge exchanges, etc.' Berkeley? 1965? Includes a ms paper 'An Accelerator for very high Energies using Superconductors' {ie the proton synchrotron}
Untitled calculations, notes on apparatus etc. - no indication of date or place of creation but possibly also on US visit 1965.
ANU Laboratory workbook 'left behind when he retired' - notes and calculations
Laboratory notebook [not Oliphant] December 1939-March 1940.

Series 14.  Letters from E.V. Appleton, 15 November 1943 re Oliphant's appointment to Tube Alloys Research in the U.S. - [working on uranium enrichment by electromagnetic methods], and 3 August 1945 re Oliphant's "scheme" for a new type of particle accelerator; also copy of letter to Dr J.W. Jenkin from the ministry of Aircraft Production 18 September 1944 re flash welding mission to America.  1943-1945. 4 items
(See also Gowing file in Series 3)

Series 17.  Copy of publication Statements Relating to the Atom Bomb, 1945 and newspaper cuttings re radar and atomic weapons/energy (including Daily Telegraph 7 August 1945 re the dropping of atomic bombs on Japan and re the proposed development of uranium at Mt. Painter in South Australia).  c1945-1947.

Series 18.  'Radar Period 1938-44'  Manuscript and typescript record by Oliphant of the history of the war-time radar project, principally re the formative role of (Sir) John Cockcroft.  n.d. 2 cm.
See also Series 2 1987 which includes a typescript memoir of John Randall and microwave radar by Maurice Wilkins.

Series 25.  Papers of Len Hibbard relating to his article, 'Oliphant – Engineer' and the construction of the ANU Homopolar generator.  1946-1997.  15 cm.
These papers were donated by Dr Hibbard in May 2003.
1.'Oliphant – Engineer'.  73 p. typescript and CD-ROM copy.
2. Documents collected by Hibbard relating to research for his paper on Oliphant and the Homopolar generator, including correspondence with Oliphant and others, articles, photographs and newspaper cuttings. 1946-64.  File also includes a letter from Hibbard to Oliphant 1971 on the death of Michael Oliphant, and menu of the official dinner given to Sir Mark and Lady Oliphant 8 october 1981.  6 cm.
3. Additional documents re the construction of the Homopolar generator, including minutes of the Accelerator Committee November 1956 and of Homopolar Generator Design and Construction meetings 1959-1961.
4. Correspondence of Hibbard with John Lawson, Rutherford Appleton Laboratories, and Bill Burcham 1995 re Lawson's research on early synchroton work in England, with copies of Lawson's notes and published paper 1993 and 1997 and Proceedings of the Birmingham Synchroton 40th anniversary reunion symposium September 1993.
Note: Appendix D: 'The Oliphant Memorandum' is available via the University of Adelaide Digital Library.
5. Correspondence with Ken Inall re his research on Oliphant, with a copy of Inall's paper 'Some of what Mark Oliphant did and others who worked with him', May 2001.
See also Series 3, Homopolar Generator files. 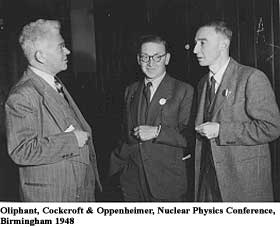 These papers comprise correspondence to and from Oliphant, Oliphant’s speeches/addresses and other material provided to Stewart Cockburn by Oliphant for the writing of the biography, some housed in folders arranged by Oliphant. Also Cockburn correspondence with Oliphant and other informants, transcripts of interviews and Cockburn’s background research material and newspaper clippings, filed in an alphabetical subject sequence mainly as arranged by Cockburn. (see Special list)
See also Series 3: Correspondence files 1953-1995
See also Cockburn papers MSS 0091