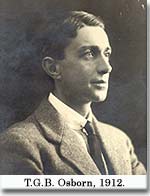 T.G.B. Osborn obtained his B.Sc. from the University of Manchester in 1908 with First Class Honours in Botany, and was appointed Lecturer in Economic Botany in the University upon his graduation. The position was renewed in September 1910 with the status of Senior Lecturer. In 1911 he proceeded to the degree of Master of Science, and in February 1912 applied for the position of Professor of Botany at the University of Adelaide, with the support and encouragement of F.E. Weiss, Professor of Botany at Manchester. In May 1912 he was notified of his appointment and took up the position in September.

As the Foundation Professor of Botany at Adelaide Osborn was responsible for establishing the botany course and department, for although Botany had been taught within the Arts degree course from 1877 (as part of biology) and from 1882 as a separate subject within the new Science degree course, it was available only as a single subject, largely devoted to taxonomic work. From 1913 a three year Botany course and an Honours degree in Botany were introduced into the syllabus, and particular compulsory courses in plant pathology and mycology and agricultural botany were also established for students in Agriculture.

The appointment of a Professor in Botany had been made possible by a Government subsidy of £600 p.a., on the understanding that the Professor act as consultant to the Government and undertake investigation of parasitic and other diseases of plants. The appointment was also closely linked with the proposed establishment of courses in forestry. Osborn accordingly was required to act as consulting botanist and vegetable pathologist to the Government and teach forest botany and entomology in addition to his teaching duties in Botany. In July 1916 the Government further proposed that Osborn be appointed Director of the Adelaide Botanic Gardens (without salary), but this appointment was vigorously opposed by the Board of Governors of the Gardens, protecting their autonomy rather than objecting to Osborn in particular, and was not taken up.

During his period at Adelaide Osborn developed and pursued research interests in plant ecology and in the primitive lycopod phylloglossum, for which he was awarded the D.Sc. by the University of Manchester in 1920. He was closely involved with the establishment of training and research in agriculture from the time of the original offer of the Urrbrae property by Peter Waite to the University in 1913, and was a member of the Special Council Committee appointed to consider the best means of utilising the gift. In 1921, jointly with Professors Wood-Jones, Cleland and Brailsford Robertson, Osborn proposed the use of Kuitpo Forest under University control for courses and experimentation in forestry, and was also associated with the development of Flinders Chase as a reserve. In 1925, through Osborn's efforts, the pastoral company of Hamilton-Wilcox Ltd. determined to make available a portion of their property Koonamore Station for a reserve to allow the study of arid flora and its regeneration after grazing*.

In 1927 Osborn applied successfully for the position of Professor of Botany at Sydney University, in succession to A.A. Lawson. He remained at Sydney University from January 1928 until appointed Sheradian Professor of Botany at Oxford in 1937, a Chair formerly occupied by A.G. Tansley. While at Sydney Osborn was still able to make regular visits to Koonanmore to continue his research on vegetation regeneration, and published in 1931 and 1935 reports on work done at the Reserve. He also developed a research interest in the vegetation of coastal N.S.W. and in the plants of its higher rainfall area, retaining his emphasis on the ecological aspects of plant life.

At Oxford Osborn's work at Koonamore was inevitably discontinued, and he spent much of his 16 years there planning and raising funds for the redevelopment of the Oxford University Gardens and for a new Botanical Department building, officially opened finally in October, 1951. Osborn retired from Oxford in 1953, and on returning to Australia renewed his association with Adelaide University. He gave a series of lectures to Botany Department students on gymnosperms and prepared a book on the same topic - ultimately never published. He was also appointed in 1959 as Acting Master of St. Mark's College, with the foundation of which he had been closely associated in the 1920's. Following Osborn's death his ashes were scattered at Koonamore on 8 August, 1974, with a memorial service conducted there by his son, the Rev. Peter Osborn, attended by members of the Botany Department.
___________________________________
* Osborn had initially gone to the property to report on soil erosion for Hamilton-Wilcox. The reserve was fenced in July 1925 and a house completed the following April. The first work of establishing the quadrat sites was undertaken by Osborn, T.G. Paltridge, M.R. Jacobs and Osborn's eldest son Peter. A number of subsequent working parties were undertaken by Osborn and other Botany staff and students. Osborn's visits inevitably became less frequent following his appointment to Sydney University late in 1928, but comprehensive mapping and photography and collection of specimens was possible with the appointment of Paltridge as a field officer stationed at Bindyi from april 1928-July 1931 with C.S.I.R. funding.

[Arranged alphabetically by name of correspondent. Principally with botanical colleagues and mentors, largely over the period 1912-28. (Refer to supplementary listing of principal correspondents)

[Includes original and printed testimonials and letters from colleagues and from the Adelaide University Registrar. For related material, see dockets 202, 280/1912 in the University of Adelaide Archives correspondence files]

5.  Correspondence and notes relating to the Directorship of the Adelaide Botanic Gardens, with newspaper cuttings and proposals for the Gardens by Osborn.  1916.  3cm.

6.  Correspondence with Manchester University administration re appointment to an Honorary Research Fellowship and award of the D.Sc.  1920.  1cm.

7.  Correspondence re Osborn's application for the Sydney University Botany Chair, and with A.C.D. Rivett, C.S.I.R.O., re the proposed Economic Botany Section of C.S.I.R.O.  1927.  3cm.

10.  Correspondence with A.G. Tansley re handbook of Vegetation of Australia, for series of Handbooks of British Empire Vegetation. November 1933-October 1934. 1cm.

12.  Letters of acknowledgement from M.B. Crewe, J. Hutchinson and A.S. Watt of Osborn's congratulations on their election to the Royal Society.  March 1947.  1cm.

13.  Letters received from C.D. Darlingron re his intention to apply for the Oxford Chair, and notes by Osborn on staff and their duties, research area and publications, prepared for his successor.  January, February 1953 and undated.  1cm.

15.  Letter of congratulation on appointment as Emeritus Professor and the Jubilee of the Botany Department, 1962.  1cm.

17.  Papers re participation in Weed Survey by Commonwealth Advisory Council of Science and Industry.  February-March 1919.  1cm.

[List of weeds, schedule, correspondence with Secretary of the State Committee.]

20.  Notes, articles and copies of early mss. relating to the establishment and development of Oxford Botanical Gardens.  1942-51 and undated.  3cm.

22.  Paper on Banks; Botanical Discoveries, prepared for Festival of Britain 1951, with notes and related correspondence, and review of H.C. Cameron's biography of Banks.  1950-53.  3cm.

23.  Copy of address at Sydney University Centenary Celebrations given on behalf of the British Universities, with copies of centenary publications and photographs.  1952.  2cm.

24.  Typescript and published copy of address on Rovert Brown 1773-1858, ? given in Adelaide 1958, and related notes and correspondence about its publication in Australian Journal of Science.  1958.  3cm.

[Notes, programme of Summer Excursion 1939 to the New Forest; report 1943 on Nature Conservation and Nature Resources and correspondence with A.G. Tansley on the report; notice of 1948 summer meeting].

[Include Hons. Lectures on "Fern allies" and "Filicales".]

[Bowenia drawings prepared for paper "Structure and Development of the Ovule of Bowenia Spectabilis" published by E.M. Kershaw (Mrs. Osborn) in 1912.]

46.  Photograph of vegetation (various), including those used as plates for articles by Osborn and Ademson, 1922. Undated.  3cm.

[An indication of the principal locations is appended]

Papers of Edith May Osborn (Kershaw)

52.  Reprint by J. Burtt Davy, contribution to discussion "Correlation of Taxonomic Work in the Dominions and Colonies with Work at Home" at Imperial Botanical Conference, July 1924.  1cm.

53.  Article by H.K.C. Mair "On the Plant Pathology of the Coastal Lagoon and Swamps from Port Jackson to the Hunter River".  1931.  3cm. (a Botany IV Project - typescript)

Plus a collection of letters of thanks for copies of Osborn's article on the Oxford Botanic Garden in Endeavour, 1950-51.