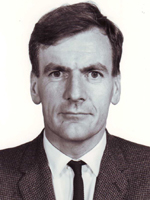 Renfrey Burnard Potts was an Australian applied mathematician.  His early work in statistical mechanics later became influential, the ‘Potts model’ becoming his most cited work.  As Professor of Applied Mathematics at the University of Adelaide for thirty years, he built up an excellent Department of Mathematics and had a major influence on the development of Applied Mathematics in Australia.  He made research contributions in mathematical physics, operations research, difference equations and transportation science (for which he was a joint winner of the Lanchester Prize for Operations Research in 1959).  He was elected a Fellow of the Australian Academy of Science in 1975 and a Fellow of the Australian Academy of Technological Sciences and Engineering in 1983.  He was interested in computing from the early days of the computing revolution and oversaw the first computer purchases at The University of Adelaide.  In 1991 he was appointed an Officer of the Order of Australia after his retirement from the University.

1.1   Curriculum vitae, including list of publications, undated but circa 1999; “Renfrey Burnard Potts 1925-2005” by L.H. Campbell and P.G. Taylor, Historical Records of Australian Science, 2014; draft autobiography with preface by Barbara Potts-Kidman, 2008.

1.2   Papers relating to seminar in honour of Potts, including retirement dinner list, 1990. Copy of draft article “Retirement of Professor R.B. Potts, A.O.” by Ernie Tuck, to be published in AMS Gazette, 1991; “Retirement of Professor Ren Potts”, note by the Mathematical Association of S.A., to be included in Mobius, 1990; numerous letters from Potts’ colleagues (and his subsequent responses) congratulating him on his retirement and the seminar to be held in his honour, 1990.

1.3    Letter to Potts from The Order of Australia Association inviting him to a luncheon in his honour where he will be awarded the A.O.; numerous congratulatory letters from colleagues and from various Senators, 1991; copy of “The Report of the Lancaster Prize Committee”, with attached note indicating this was awarded to Potts for his research whilst based at University of Toronto, 1960; original of The Australian Mathematical Society Gazette, in which Potts is named as the recipient of the 1995 ANZIAM medal; original of The University of Adelaide Faculty of Mathematical and Computer Sciences Newsletter (no. 14, July 1995) in which Potts is celebrated as the ANZIAM medal recipient; variety of official certificates, including 1952 Operations Research Society of America membership, University of Adelaide 1945 Bachelor of Science degree, 1994 Australian Mathematical Society fellowship, 1975 The Institute of Mathematics and its Applications fellowship, University of Adelaide Sports Association life membership 1983, etc.

1.4   2 CD recordings of Potts’ memorial seminar, including talk by Angus Hirst re ‘Potts model’; funeral eulogy by Ernie Tuck (4 pp.); variety of original publications, including The Queen’s College Record in which Potts obituary appears, 2006, The Australian Mathematical Society Gazette in which outstanding results in maths at Adelaide University are recorded, 1991; Leading Edge in which Potts’ retirement is noted (p. 15), 1991.

Typescript copy of Potts’ 1951 Oxford thesis The mathematical investigation of some cooperative phenomena.  Reprint of Potts 1951 paper "Some generalized order-disorder transformations".  Originals and copies of The Australian Mathematical Society Gazette (1991-1992) in which “The Potts Model” is discussed by Michael N. Barber and S.O. Warnaar; reprint of “The Potts Model” by F.Y. Wu, published in Reviews of Modern Physics, January 1982; photocopy of “Order Parameter of the Chiral Potts Model Succumbs at Last to Exact Solution” by Charles Day, published in Physics Today, November 2005. Also includes two books, Potts Models and Related Problems in Statistical Mechanics by Paul Martin, 1991 and Teach Yourself Typewriting by Pitman’s College,1949 and possibly referred to by Potts in typing his thesis.

Series 3: History of mathematics at The University of Adelaide  (12 cm)

Background material on the early history of mathematics at The University of Adelaide including Potts’ manuscript Mathematics at The University of Adelaide, 1874-1944.  Talks given by Potts on Horace Lamb.  Correspondence related to Horace Lamb research.  Copies of publications by H. Lamb.  Papers on the acquisition of the Horace Lamb ‘rose bowl’ and ‘illuminated parchment’.  Copies of papers on William Henry Bragg by other authors.  Correspondence on the inaccuracies in documentation about W.H. Bragg’s appointment.

Copies of the following journals and magazines to which Potts contributed articles:

Copies of lecture handouts and two class exercises for students, 1968-1987.

Copies of lists of students who have taken degrees in Mathematics, 1901-1984 (for history).

Almost complete set of reprints of papers by R.B. Potts, numbered as in Campbell and Taylor biography

Reprints of papers by R.B. Potts not listed in Campbell and Taylor biography.

Includes 1965 copy of: Elementary matrices by D.S. Mitrinovic where Potts is mentioned in the foreword.

1970: Application of CONFPAK developed by Computing Centre to deal with data from conference enrolments, B. Kidman.

1971-1977: Reports related to introduction of Computer Science into academic mainstream, B. Kidman