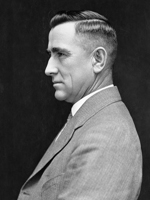 The 32nd Premier of South Australia, Robert Richards was born at Moonta on the Yorke Peninsula, approximately 100 miles north-west of Adelaide.  He was the youngest of Richard and Mary Richards' twelve children and was locally educated until the age of thirteen, when he left school to work in the Moonta mines.

In his early twenties Richards moved to Burnie, Tasmania, where he managed a copper mine.  He then returned to Moonta, marrying Ada Dixon in 1914, before his election has President of the mining section of the Australian Workers' Union in 1917.

Richards was a popular man who enjoyed playing cricket and football and was well-known in the local community.  So his election to the district of Wallaroo (which covered Moonta) in the South Australian House of Assembly in 1918 was not surprising.  He was a great leader and debater and was soon named Chairman of Committees, first in the John Gunn led government and then in Lionel Hill's cabinet.

In 1933 Lionel Hill resigned as Premier just nine weeks prior to the election.  His abrupt departure left Richards a reluctant Premier.  He spent nine weeks in the position, trying desperately to emphasise the achievements of his cabinet but the effects of the Depression combined with a fragmented Party, led to a heavy defeat for Labor.

Richards worked to reunite the ALP over the next year, serving as Deputy Leader from 1934 and was eventually returned to Labor leadership in 1938.  He remained opposition leader for eleven years and although Labor increased its vote at three consecutive elections, it could not win government.  The realisation that there was little chance of Labor returning to government under the current electoral systems, combined with the death of his wife in 1949, saw Richards retire from politics to serve as the Commonwealth Government's Administrator to Nauru.

On his return from Nauru, Richards spent time as the Director of Radio 5KA, was appointed to the S.A. Government Forestry Board and was commissioned to investigate issues relating to delinquent children, as well as mining and housing issues.  He died in Moonta in 1967 and received a state funeral.

Biography adapted from his entry in the Australian Dictionary of Biography by Donald J. Hopgood

Contents of the journal include: