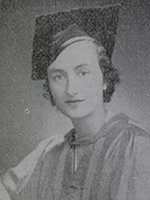 Enid Robertson was born on the 28th September 1908.  The daughter of Clara Bell (Jagoe) Robertson and Frederick Thomas Robertson, Enid grew up at 30 Harrow Road, St. Peters, where her family lived for more than 90 years.  She had four brothers, Frederick, Gordon, Douglas and Sydney and one sister, Iris Esther (Robertson) Sells.  The house was filled with books and pianola records, and Enid regularly attended local concerts, operas and plays; she benefited greatly from her father’s role as associate editor of The Advertiser and his receipt of free tickets to Adelaide events in that capacity.

Enid commenced a Bachelor of Arts at the University of Adelaide in 1927.  She studied English Language and Literature, French, Latin, Geology, Psychology, Logic and Philosophy and her degree was conferred on the 11th December 1929.  That year she also entered the Elder Conservatorium where she studied Piano and Piano Theory until 1934.  Enid’s University of Adelaide student card suggested an interest in science too, indicating her completion of first year chemistry, physics, botany and zoology in 1943.  University Calendar pass lists from this era, however, fail to confirm these studies.

On the 18th November 1936, The Advertiser reported that Enid, ‘South Australia’s youngest Doctor of Philosophy’, had just received her new doctor’s degree from the University of Durham for her thesis on psychological aspects of musical appreciation.  Of the occasion itself, Enid stated: “There was quite an elaborate little ceremony over the conferring of the degrees, and one felt that the past traditions of the great University were very impressive and very alive.”

Robertson quickly capitalised on her studies, becoming the first woman in Australia to make a career as a music critic.  She contributed a regular column to The Advertiser during the 1930s, 40s and 50s, reviewing classical music performances around Adelaide.  In fact, on 4 September 1937, the Newspaper described her as ‘an authority on the evolution of music’ in introducing the article ‘The distinction between noise and discords.’  In it, Robertson’s knowledge of the psychology of music appreciation was clear.  She described noise as having “a deleterious effect on the nerves” but suggested that “a distinction must be made between noise, a confused and haphazard combination of related sound-vibrations, and the discords of music, which, though perhaps intrinsically more or less disagreeable (and only extreme discords are completely disagreeable), when employed as related parts of a musical whole have the power of pleasing aesthetically.  That is, dissonance, or even, in extreme cases, noise, when submitted to the laws of artistic function, is not only tolerable but positively enjoyable.”

The following collection of Australian, French and English music, theatre and ballet programmes span performances from 1894 to 1963 but principally 1926-31.  The majority are from Enid’s own collection, with some earlier programmes from the collection of her father.  The programmes were presented to the Library after Dr Robertson's death through the agency of Mrs Marcie Muir.

Additional biographical cuttings on Enid Robertson, particularly those from newspapers and journals, are held by the National Library of Australia, call no. 496470; BIOG.