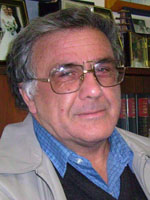 Chester Schultz (pianist, composer, writer and historical researcher) was born in Victor Harbor in 1945. After attending Victor Harbor Primary and High Schools, he studied at the University of Adelaide, where he majored in History and English, gaining B.A. (Hons) in History in 1967. Having been a pianist and self-taught composer from an early age, he then taught piano privately in order to fund his study at the University Music Department. He majored in Composition with Jindrich Feld, Peter Tahourdin and Richard Meale and in Ethnomusicology with Dr (later Professor) Catherine Ellis. He also sang at the Centre for Aboriginal Studies in Music (CASM) with traditional songmen from Indulkana (now Iwantja). This began a long association with CASM, where he taught in 1980-1 and worked on their committee for some years with Leila Rankine and other Aboriginal staff. He was also associated with the Pitjantjatjara Land Rights Support Group in 1979-80. Since 2000 he has worked with the Kaurna language activists Kaurna Warra Pintyanthi (KWP), after contributing as composer, researcher and editor to their musical publications: Narungga, Kaurna and Ngarrindjeri Songs (1990); Kaurna Paltinna: a Kaurna Song Book (2000) and Kaurna Palti Wonga: Kaurna Funeral Protocols (2006).

As a pianist he was repetiteur and chorus-master for New Opera SA (the precursor of State Opera SA in the 1970s), and for 60 years has accompanied many singers, choirs and musical theatre groups.

As a freelance composer, his work has included the dramatic musical No Fixed Address (Churches of Christ Youth Choir, 1979); the song-cycles Six Poems of Judith Wright (1986) and These Legends, Love (2008, words by Auden); Ngartong: Encounter Bay Jubilee Music (for the University of Adelaide Cello Ensemble, 1986); the cantata Songs Further Out (1987); Music Is Our Culture (a collaboration with four indigenous CASM staff and the Adelaide Symphony Orchestra,1998); and the soundscape of environmental recordings Within Our Reach: a symphony of the Port River (1996).

As an author he was researcher and chief author of the ground-breaking survey of Aboriginal non-traditional music throughout Australia, Our Place, Our Music (ed. M. Breen, Aboriginal Studies Press 1989), written collaboratively with Leila Rankine and other CASM staff.

In 2007 he began work on the Southern Kaurna Place Names Project, which he still continues in 2017. Brief summaries of individual place-names appear on the dedicated website http://kaurnaplacenames.com, backed by scholarly essays available to the public on KWP’s website: https://www.adelaide.edu.au/kwp/placenames/research-publ/
Arising from this interdisciplinary work which straddles history, geography, language and anthropology, is a book-length history of earliest contact with Aboriginal people in SA - Feet On the Fleurieu, Language On the Land (currently in progress).

‘Pilgrims Papers: [studies in The Gospel, in our work and in our world]’ by Chester Schultz (Adelaide: Chris McNicol, 1978) has been catalogued separately for the University Collection.

Digital copies of draft Introduction and Chapters 1-3 of Feet On the Fleurieu, Language On the Land are available

First drafts prepared by Chester Schultz, D. Leila Rankine, Doug Petherick, Marylouise Brunton, Guy Tunstill and Rosie Ryan, with help from others, as a chapter for the anthology ‘Missing in Action’ edited by Marcus Breen

For the history of CASM see

CASM course booklets 1979-1991 have been catalogued separately for the University Collection, along with:

University of Adelaide. Elder Conservatorium of Music Course booklets 1981 and 1982

Committee for Aboriginal Studies in Music

Arrangements for The Ensemble, a core group of AAO – group was disbanded soon after pre-guitar and drum inclusion

National Film & Sound Archives CASM Oral History Project, 2013
In 2013 the NF&SA conducted interviews with Chester Schulz, Jardine Kiwat, Guy Tunstill and Georgina Williams, in association with the Adelaide Film Festival showing of the remastered film ‘Wrong Side of the Road.’

Leila Rankine file (copied from originals held by Chester Schultz)
Leila Rankine was a Ngarrindjeri and Kaurna woman who grew up at the Raukken Aboriginal Settlement. Her lifelong involvement with Aboriginal music included foundation membership of the Adelaide Aboriginal Orchestra and the Institute of Narrative and Music of Aborigines which was incorporated into the U. of Adelaide Centre for Aboriginal Studies in Music, with Leila as Chairwoman until retirement in 1988. She was also editor of the journal Tjungaringanyi and a contributing poet, and a founding and lifetime board member of the Warriappendi Alternative School.

File of biographical information re the life and work of Leila Rankine, including:

‘Pic Pac’ kit on ‘Land of the Ngarrindieri’ is available in the Rare Book Collection and was not copied.

Booklet: Inma Nyi: NYI. Recordings, Song Texts, Explanations and Illustrations, as presented at Indulkana, Easter, 1975, and translated, annotated and illustrated by the visiting lecturers from Indulkana throughout 1975-76 (Centre for Aboriginal Studies in Music) 39 p.

Folder: Ethno and ‘personal and local traditional’ studies for CASM. Published in Tjungaringanyi v. 12  no. 1 (1992)

“Remembering The Sunday Club” exhibition, Black Diamond Gallery, Port Adelaide, 31 May-5 June 2011 / coordinated by Noela Bajjali.
The Sunday Club began in 1970 with a program held on Sunday mornings for Aboriginal Children, run by Port Adelaide Central Mission volunteers in collaboration with members of the local Aboriginal Community. The program evolved to include The Aboriginal Friendship Club, An Ethnic Music group (working with Dr Cath Ellis of Adelaide University to preserve Aboriginal Musical heritage), A Sunday Night Jazz Club, The Young Adults Social Committee, Homework Centres with Aboriginal parents and volunteers acting as tutors, and a Health Club aimed primarily at mothers. In 1975 the administration of the program was handed over to the Aboriginal community, achieving its aim of increasing the independence of the participants.

CASM photographs shortlisted for Our Place Our Music, 1988, with annotations by Chester Schultz, 2015

With letter from Joanna Boileau of the Australian Institute of Aboriginal Studies, 6/3/1989, to Schultz re return of photographs

Musical written by Chester Shultz 1978. Premiered by the S.A. Churches of Christ Youth Choir in Scott Theatre, Adelaide, March 30th 1979. A more complete listing prepared by Schultz is with the series.

Folder: Drafts / worksheets of early scripts with titles ‘A Load of Old Rubbish” and “Twirp”

About ‘The Man in Blue’ scene - Digital copy available

VHS. 1997 Festival of Music. Includes ‘The Rain Song’ by Schultz, played by Chester, Miriam and Narelle. Digital copy of lyrics and scores available

Commercial cassettes (with digital copies)
Digitised for preservation and research