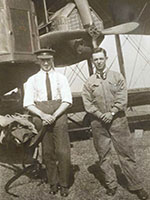 Sir Ross Macpherson Smith (1892–1922). Ross Macpherson Smith was born on 4 December 1892 at Semaphore, Adelaide, son of Scottish-born Andrew Bell Smith, station manager, and his wife Jessie, née Macpherson, born in Western Australia. In 1897 Andrew Smith became the manager of the Mutooroo Pastoral Co. and Mutooroo station, a property of some 3000 sq. miles (7700 km²). Both Ross and his brother Keith were educated at Queen's School, Adelaide (as boarders), and for two years at Warriston School, Moffat, Scotland, their father's birthplace.

On returning to Australia, Ross joined the Australian Mounted Cadets and was selected in 1910 to tour Britain and the United States of America as a South Australian representative. He then joined the 10th Australian Regiment, the Adelaide Rifles.

Ross Smith had served in the cadets and the militia before he left Australia as a sergeant in the 3rd Light Horse Regiment in October 1914; he went to Gallipoli the following year. He was later commissioned and was at the battle of Romani (in the Sinai) in August 1916. The next year he volunteered for the Australian Flying Corps. Flying with No. 1 Squadron AFC, Smith took part in attacks, aerial photography missions, and bombing raids on Turkish forces. On one occasion he landed in the face of the enemy to rescue a downed comrade. During his extensive war service he was twice awarded the Military Cross, received the Distinguished Flying Cross three times, as well as the Air Force Cross.

A gifted flyer, Smith became experienced in flying his squadron’s twin-engined Handley Page 0/400 bomber; on occasion Lawrence of Arabia was his passenger. While still with the flying corps, he made pioneering flights from Cairo to Calcutta, and from Calcutta to Timor.

On 12 November 1919, assisted by his brother Keith and two mechanics, Wally Shiers and Jim Bennett, he set out to fly from England to Australia in a large Vickers Vimy bomber. It was an epic 28-day flight, completed at an average speed of 137 kilometres per hour, but not without mishap. On their arrival, the pioneering flyers were welcomed home as national heroes; their £10,000 prize money was shared equally. The two brothers were knighted. In April 1922, while preparing for a record-breaking around the world flight, Smith and Bennett were killed in a crash. Keith Smith witnessed the death of his brother, who was not yet 30.

(Adapted from the Australian War Memorial) 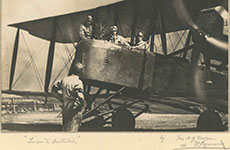 Keith’s earlier career began with employment at Elder Smith & Co. in Adelaide on the outbreak of war. His career was very different to his brother's, yet both were to become aviators within weeks of each other. Keith was initially rejected for service with the A.I.F. on medical grounds.  He does not therefore appear on the AIF Embarkation Roll.  He underwent medical treatment and later paid his own passage to England to enlist in the Royal Flying Corps. Keith Smith did not see active service as after completing his training and being posted to with 58 Squadron, he was posted to 75 Squadron, a home defence unit where he was gunnery instructor. On 1 April he was promoted Lieutenant and spent the rest of the war in Britain with training establishments. He was placed on the unemployed list, Royal Air Force (R.A.F.), on 5 November 1919.

He joined up with his brother soon after the war and when news of an air race became known they planned to take part. They obtained a Vickers Vimy (another twin engined 'heavy' - for the time - bomber similar to the 0/400 bomber), supplied by the manufacturer.  It was the same type of aircraft used by Alcock and Brown to cross the Atlantic earlier in the year. With Keith as assistant pilot and navigator and accompanied by two mechanics, Wally Shiers and Jim Bennett, they left Hounslow, England, on 12 November 1919. The distance covered in this epic flight was 11,340 miles (18,250 km). It took just under 28 days with an actual flying time of 135 hours at an average speed of 85 m.p.h. (137 km.p.h.). Three years later another proposal was being hatched as pioneer aviators began undertaking all sorts of long distance flights.  The next proposal, to fly round the world in a Vickers Viking amphibian, ended in disaster. Ross and his long-serving crew member Jim Bennett were test-flying the aircraft at Weybridge near London, it spun into the ground from 1000 feet (305 m), killing both. The flight was abandoned. The bodies of Sir Ross Smith and Lieutenant Bennett were brought home to Australia and after a state funeral Smith was buried in Adelaide on 15 June 1922.

In 1924 Keith had married Anita Crawford of Adelaide.  They were to have no children. Sir Keith Smith was appointed Australian agent for Vickers and retained the connection with this British company until his death. Smith advocated in the early 1920s to employ Vickers-built airships on Imperial air routes. Keith remained a leading Australian spokesman on aviation matters and travelled extensively on Vickers' behalf.

During World War II he was vice-chairman of the Royal Australian Air Force Recruiting Drive Committee and strongly supported the idea of an Empire air force. The Empire Air Training Scheme largely achieved this in the context of NW Europe, but Australia's involvement in the Pacific and burgeoning US influence and British indifference to the Australian market on the other side of the world undermined Smith's aspiration for Empire aviation. Notwithstanding, he was to become vice-president of British Commonwealth Pacific Airlines, a director of Qantas and Tasman Airways and by the end of his career was in control of the many Australian-based Vickers companies.

Sir Keith Smith died of cancer in Sydney on 19 December 1955.

The Vickers Vimy flown by the Smith brothers, Shiers and Bennett in 1919 is displayed at Adelaide airport.

The Smith papers were presented to the Library by Lady Anita Keith Smith in January 1967.

Series 1: Certificates (in photo album except where indicated)

C5 - [Medical certificate: of Sir Ross Smith for scarlet fever] Inscription on back "my ticket when I left Anzac"

Series 2: Miscellanea (in photo album except where indicated)

M3 - Bedouin dialect, vocabulary of: To be carried in the coat pocket by all pilots and observers on desert reconnaissance. Bound in cloth. Ground signals for pilots of disabled aeroplanes handwritten on back.

M6 - Her Majesty’s Theatre Gala performance:  "The Bing Boys on Broadway". 18th February, 1920. In the presence of and under the patronage of Mr. and Mrs. Andrew Smith, and their sons ... Program on satin. In Oversize box 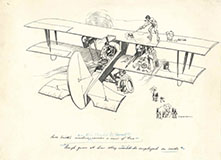 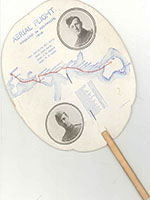 M13 - Stamps issued by PMG to commemorate the 50th Anniversary of the England-Australia Air Race in 1919. 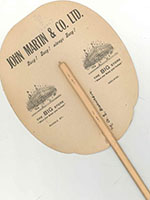