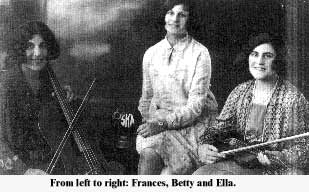 Frances (Francie) Solomon studied at the Elder Conservatorium c1924-31 as a student of the cello under William Silver and Harold Parsons.  Her sisters Ella and Betty also studied at the Conservatorium, Betty completing an Associate Diploma in 1930. On her marriage to Sydney Gould in 1932 Frances ceased her formal studies, but continued to participate in music performance and maintained a friendship with her former teacher Harold Parsons and his family throughout her adult life.

After the family moved to Broken Hill in 1939 she formed a trio with pianist Myra Collins and violinist Doreen Kitchen, who from 1942 played also with the local Philharmonic Society. She joined the Unley Orchestra on the family's return to Adelaide in 1947 and subsequently the Norwood orchestra (of which her husband was President from 1968), playing until the early 1990s.

These papers were kindly donated to the Barr Smith Library at the University of Adelaide by her daughter Janice Gould in November 2002.  A selection from Mrs Frances Gould's printed scores and other published works (including a copy of the score of César Franck's Symphony in D minor, annotated by Parsons "I did the first performance of this symphony in South Australia with the S.A. Symphony Orchestra") were also presented to the Elder Music Library.

2.  Letter advising nomination of Frances Solomon as a member of the Common Room Committee 1931.

5.  Program of [Broken Hill] Philharmonic Society concert 24 November 1942 [with cuttings of press reviews and photograph of the trio of Gould, Kitchen and Collins]   photocopy of original held by Janice Gould

6.  Photographs of Frances Solomon with her sisters Betty and Ella c1930; with the Unley Orchestra 1947, and the Norwood Orchestra (undated).  3 items.

10. Issue of South Australian Homes and Garden March 1948 with articles on Harold Parsons and on 'Lenten and Easter Music in Adelaide'.