Provenance of the Recordings 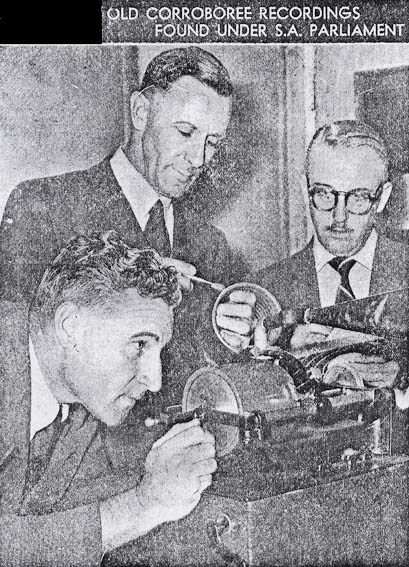 In 1901-2 Baldwin Spencer and F.J. Gillen undertook an expedition to Central Australia which traversed the continent from Oodnadatta to Powell Creek and then eastwards to Borraloola on the Gulf of Carpentaria, publishing their experiences as The Northern Tribes of Central Australia in 1904. While essentially a Victorian venture, some equipment was supplied from South Australia, including an Edison phonograph provided by Mr J. Angas Johnson which was used to record on large wax cylinders the ceremonial songs of the Aranda people.

Spencer first played the recordings to a gathering at the Melbourne Town Hall in 1902, and on the 24th July that year Gillen played the recordings to a Royal Geographical Society sponsored lecture in the Adelaide Town Hall on ‘The Life of a Central Australian Aborigine’, which was then repeated at the University of Adelaide on September 17. Twelve cylinders of the recordings were bequeathed to the Royal Geographical Society of SA by Mr Gill, Under-Treasurer of SA and a member of the RGS, along with his Library. A further 4 intact cylinders were held by the National Museum of Victoria. In 1924 Spencer also used the phonograph recordings to illustrate a public lecture during the ANZAAS Conference in Adelaide.

The 12 cylinders (1 of which was broken in multiple pieces) were housed in a case with a handwritten list inside the lid and typewritten titles inside each cylinder. When the Royal Geographical Society shifted into the Institute Building of the Public Library, Mr Parker, Clerk of the House of Assembly, arranged for the recordings to be kept in the underground vault of Parliament House. When he left the House the recordings were kept for a time at Prince Alfred College, before being handed over in 1955 to Mr M.J. Barrett, President of the Anthropological Society, who undertook to find a means of playing the cylinders for transcription onto magnetic tape and eventual publication as permanent gramophone discs.

M.J. Barrett, while in Sydney for a 1956 Dental Congress, arranged an experimental taping of two of the cylinders using the Sydney Museum of Applied Arts & Sciences’ 1898 Edison Concert Phonograph. Later in 1956, with the cooperation of ABC staff in Adelaide and Sydney and the Director of the Museum of Applied Arts & Sciences in Sydney, Barrett arranged for the Phonograph to be set up in the ABC Sydney studios and had recordings made from the cylinders which had been taken to Sydney by G.H. Lawton, Reader in Geography at the University of Adelaide and Vice-President of the Royal Geographical Society. Mr Newton Hobbs (Transcription Officer of the ABC, Sydney) introduced each tape by reading the titles from the cylinder ‘labels’. A photograph of the occasion was published in the Sydney Morning Herald 13/4/1956.

In 1957 the cylinders were handed over to the Board for Anthropological Research (later known as Board of Aboriginal Studies) of the University of Adelaide, and in the 1960s Barrett and Lawton worked with T.G. Strehlow on the analysis of the 1901 tapes for publication as gramophone records along with explanatory pamphlets. With the cooperation of Dr Alice Moyle of the Dept. of Music of Monash University (see Supplement 2) Barrett also produced an edited version of the tapes. The original cylinders were for a time lodged with the Barr Smith Library for safekeeping, and are now held by the SA Museum. The gramophone records were never published.

For a closer look at some of the notebooks, films, audio recordings, illustrations and photographs collected during Spencer and Gillen's studies in anthropology between 1875 and 1912, visit the Spencer & Gillen: A Journey Through Aboriginal Australia website.

Series 1 consists of taped transcriptions of the 1901-2 Adelaide wax cylinders made in 1956 in Sydney by the ABC, along with tape copies of some of the Melbourne cylinders made in 1963. Series 2 consists of duplicate tapes of Spencer 1901 Expedition, plus master tape of Aboriginal songs annotated by E.H. Davies, and cassette of songs from 1927 and 1929 expeditions, transferred from the Board of Aboriginal Studies in 1984. Series 3 contains photocopies of supplementary articles and documentation, and photocopies of documentation and correspondence compiled by G.H. Lawton, M.J. Murray and the Barr Smith Library concerning the transcription and storage of the recordings.

‘Spencer tapes from Adelaide’ (a) Tape 3. Copy of Tape B: Baldwin Spencer Arunta songs (University of Adelaide: Board of Anthropological Research). Made by ABC. 7 ½ inch. Some material on track 2.

Series 2: [Tapes transferred to the Library in March 1984 from the Board of Aboriginal Studies, along with some Board films and records]

Consists of duplicate tapes of Spencer 1901 Expedition, plus master tape of Aboriginal songs annotated by E.H. Davies, and cassette of songs from 1927 and 1929 expeditions. Copies made in 1980.

Folder 2: Papers collected by Mr M.J. Barrett, University of Adelaide, Dept of Dental Science. 99 items. Includes correspondence re the transcription of the recordings 1956-1970, descriptions and talks on the history of the recordings, ms notes and documentation (some duplicated from
Folder 1)

Folder 3: Papers collected by the Barr Smith Library. 11 items.
Includes correspondence 1979-1980 re transfer of copies of the tapes to the Library by the Board of Aboriginal Studies, and copies of documentation re the recordings.