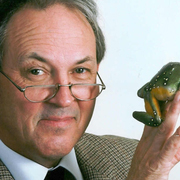 Michael J. Tyler, generally known as “Mike” and dubbed “The Frog Man,” was born in Britain and early developed an interest in herpetology. While working as a volunteer at the British Museum, he was advised to go to Australia and Papua New Guinea if he wanted to do any ground-breaking research on amphibians. Around 1958-1959 he hitch-hiked to Australia.

He joined the University of Adelaide staff as a laboratory technician in 1961, studying and researching part-time, and by 1971 had been promoted to Laboratory Manager in the Department of Human Physiology and Pharmacology. In 1974 he was awarded his M.Sc., and in 1975 won a position as Lecturer, Department of Zoology. He was promoted to Senior Lecturer in 1979, and was appointed Associate Professor of Zoology in 1984. In 2002 he was awarded D.Sc. and appointed Visiting Research Fellow.

His research into amphibians both in Australia and overseas has been continuous and extensive, with support from organisations as diverse as the South Australian Museum (in 1965, his first overseas travel grant), the Mark Mitchell Foundation, Rotary International, Australian Geographic magazine, Hamilton Laboratories, Australian National University, Mount Isa Mines and the World Wildlife Fund. Apart from descriptive, habitat, behaviour, identification and taxonomic work, which includes identification of new species, his research has investigated novel chemicals which have found, or may find, pharmaceutical and industrial uses such as fluid balance medications, sunscreens and adhesives. He has investigated frog populations as an indicator of environmental health of aquatic systems and frog mutations as an indicator of pollution. He is one of many who have worked on Australia's cane toad (previously Bufo marinus, now Rhinella marina) pest problem.

Copyright for the content of this collection remains with Michael J. Tyler until his death.

These notebooks were presented to the University of Adelaide Library on 21 June 2017.
Comments in italics were supplied by Mike Tyler.

1959-61, 1962
Most of the experiments described here is a pharmacological preparation which I developed – the isolated perfused heart of the lizard Tiliqua rugosa – the Sleepy Lizard. Animals were collected in the sandhills north of Grange which, at that time, had not been developed for housing …
Results were recorded on a Kymograph soot recorder.

In 1968 I started work on the musculature of Australasian tree frogs of the family Hylidae. At that time all Australasian tree frogs were put in the genus Hyla. I found that all of our frogs possessed a separate element of one of the muscles of the throat which I called “the apical element of the intermandibularis muscle.”
Mandibular musculature – Hylidae.
Contains manuscript pencil notes and sketches.

1970
I was working as a lab technician in the Pharmacology Dept. CSIRO gave me a grant to spend a month at the museum at the University of Kansas as a visiting Professor. There I examined hundreds of species and afterwards my work finalised and in 1971 published a paper changing the Australasian Hyla to Literia – a step adopted still in 2017
Dissections of frogs at the Natural History Museum at University of Kansas 1970. Folio lined notebook with pencil notes and sketches, with additional loose pages

1988
Cane toads
Information that cane toads were dying of disease was questioned. Accordingly an experiment was designed to provide food ad libitum. Toads were fed daily and weighed. After six weeks all had doubled or tripled their body wt! A paper on the results was rejected because the bladder was not emptied prior to weighing.