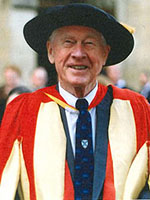 Entomologist, Thomas White, was born in Ruawai in 1927.  On obtaining his B.Sc in New Zealand, he travelled to Edinburgh and earned his Forestry degree, before spending three months in Canada studying the country’s Forest Insect and Disease Survey.  Returning to New Zealand, White worked for the Forest Research Institute between 1955-62 as both Forester and Senior Scientist in charge of the organisation’s Forest Biology Survey.

In 1963 White brought this valuable experience with him to South Australia, where worked in the Department of Entomology at the Waite Agricultural Research Institute.  Three years later he was appointed Lecturer in the University of Adelaide’s Zoology department.  He was a member of the Curriculum Committee and was, for two years, elected Patron of the Students Science Association.

In 1972 White became Professor of Biology and Head of the School of Natural Resources at The University of the South Pacific, Suva, Fiji.  Here, he established policy on the direction and emphasis of a teaching within the School, encouraging education in general science but also in biology, particularly its ecological and environmental aspects.  He also assisted staff to submit research proposals, and took great pride in seeing the School flourish again with the award of funding for research.  By 1977, White had become Dean of the School of Applied Science at Riverina Murray Institute of Higher Education (Charles Sturt University), Wagga Wagga, where he remained until 1987.

White eventually became Emeritus Professor and Dean at the University of Adelaide.  Having earned his Ph.D (Food Outbreaks of Phytophagous Insects) in 1966, he turned his attention to a D.Sc thesis, completing ‘The role of nitrogen in limiting the abundance of animals’ in 1999.  He continued to write widely on forest biology, particularly on ecological and physiological relationships of animals to their food plants.  His work was published in numerous journals and for fifteen years he was the Australian Zoology Editor for Oecologia.  He was also awarded the Sir Joseph Verco Medal for publication of distinguished scientific research.

The following collection of papers reflects White’s interest and research in fields such a Eucalyptus dieback (associated with lerp epidemics) and the shortage of food in animal ecology generally.

Includes White’s type-written “diary notes” re his research trips to New Zealand, plus a variety of letters to Forestry colleagues and Universities re publishing articles, etc.

Tentative itinerary for White’s entomology tour in Canada, 1954; White’s handwritten diary notes of the trip, Aug-Oct 1954; typewritten report “Forest insect and disease survey – Canada” re the three month trip outlining the development, organisations and operation of the Canadian Forest Insect and Disease Survey which is designed to detect, study and formulate methods of controlling various pests; various documents and correspondence re trip allowances and expenses.

General and administrative correspondence re PhD thesis, including letter from Registrar confirming acceptance of White’s chosen field of study, 1963; letter from Registrar confirming conferral of PhD, 1966; letter from A. Poole, Director-General of N. Z. Forest Service approving extension of White’s leave in order to complete his thesis, 1965; resignation letter from White to Director-General N. Z. Forest Service, 1965; letter from I. M. Robertson to White accepting his resignation, 1966; White’s application for the Australian Newsprint Mills’ postgraduate fellowship and subsequently letters of decline from the Forestry and Timber Bureau, Canberra, 1961-62; various correspondence re Adelaide University’s PhD rules and regulations.

Letters, comments and feedback re White’s paper, “Weather, Eucalyptus dieback in New England, and a general hypothesis of the cause of dieback”, submitted to Pacific Science for publication. Includes K. W. Bridges’ recommendation for publication, plus feedback and suggestions for improvement by Elaine Davison, Brian Meyers and Ken Old. Also includes White’s “Stress index” notes and graphs of Perth rainfall figures from 1897-1983

Primarily White’s requests and letters of thanks for reprints of other authors’ works whilst employed at the Waite Agricultural Research Institute. Includes newspaper clippings on Eucalyptus dieback; White’s questions and answers to others re topics such as plant nitrogen levels and their relation to pest and disease problems; letters to and from Mike McKelvey, Pelican Lagoon Research Centre, Kangaroo Island, re Tammar Wallaby paper for publication in Oecologia; B.G. Murray’s review of White’s paper “Opposing paradigms: regulation or limitation of populations?” for publication in Oikos Opinion; letters re White’s honorarium from Dept. Biological Sciences, Northern Arizona University; draft copy of White’s comment “Carnivorous herbivores” for publication in Nature Australia; referee’s report on White’s paper “Outbreaks of house mice in Australia…” and confirmation from editor of Australian Journal of Agricultural Research of its acceptance for publication, 2001, etc.

Primarily typewritten letters re White’s Sept/Oct 1984 visit to China under the Australian Academy of Science exchange agreement with Academia Sinica.  Includes 3-week itinerary; White’s summary report on the visit, with a focus on research in insect ecology; variety of Chinese business cards collected during the trip; brochure “China facts & figures: The achievements of 35 years in China’s economic development”. Also includes typewritten letter from Shih-chun Ma, Professor of Insect Ecology at Institute of Zoology, Academia Sinica, advising the decline of Wu Kunjun’s application to travel to Australia to work with White due to health concerns.

Primarily typed and handwritten aerogrammes re White’s appointment as Professor of Biology and Head of the School of Natural Resources at the University of the South Pacific, Laucala Bay, Suva, Fiji. Includes offer of appointment, terms of service for academic staff, notes on allowances and provisions, etc. Also, some research material, including White’s 1978 paper “The importance of relative shortage of food in animal ecology”, published in Oecologia.

Primarily typewritten correspondence between White and Piet J. Den Boer, external examiner of White’s thesis which formed part of the work submitted for his 1999 Degree of Doctor of Science at the University of Adelaide. Includes Den Boer’s feedback and comments on White’s work about the causes of changes in the numbers of animal populations, particularly nitrogen shortage in food.

Correspondence with Jurskis re Eucalyptus dieback, including extracts from Jurskis’s and Turner’s paper on dieback, undated. Also, copies of photographs of dieback on spotted and blue gum, and regrowth on river peppermint gum at Brogo River, NSW.  Copy of White’s address to colloquium of the NSW Forest Services Health Advisory Committee “Fundamental causes of Eucalypt decline and possible management solutions”, 2003.

Correspondence mostly related to White’s research for his published journal papers. Includes draft versions of papers such as “Mast-seeding and mammal-breeding: Can a bonanza food supply be anticipated”, New Zealand Journal of Zoology, 2007; “The world is green”, Journal of Vegetation Science, 2006; “Plant vigour versus plant stress: A false dichotomy”, Oikos, 2009; “Catching a red herring: Autumn colours and aphids”, Oikos, 2009; “The role of food, weather and climate in limiting the abundance of animals”, Biological Reviews of the Cambridge Philosophical Society, 2008.

Primarily correspondence, and some promotional material, related to White’s book, The inadequate environment: Nitrogen and the abundance of animals. Includes book reviews, order forms and congratulatory letters from colleagues. Also includes many letters from White to others promoting his book.

Correspondence, and some research material, relating to White’s 2005 book, Bush boy to bug man: The making of a forest entomologist. Includes White’s requests for information from colleagues about the New Zealand Forest Service; multiple book reviews and associated research materials including Matthew Wright’s A short history of Gwavas state forest 1944-1986.

Handwritten and typewritten correspondence during White’s early employment at the University of Adelaide. Includes his requests for reprints and comments on works by other authors.  Also, administrative correspondence such as offer of appointment, Lecturer in Zoology; letter of acceptance; letter of resignation; letters from Adelaide University Council and the Science Association thanking White for his contributions.

Administrative and research related correspondence during White’s employment at the Riverina College of Advanced Education. Includes White’s application for Assistant Principle for Academic Affairs; offer of appointment as Dean of the School of Applied Science; numerous requests for reprints of works by other authors, etc.

2.15 Correspondence, ordered alphabetically by surname, with colleagues and journal editors

Various research-related letters to and from colleagues, including multiple requests for reprints of works by other authors.

3.2 Schedule, notebook, handout on the forest line arboretum in Utsjoki and Inari, maps and postcard re the 1981 ‘Herbivory at Northern Latitudes’ symposium held at the Kevo Subarctic Research Station in Finland.  Also includes White’s typed summary of the symposium, where he presented his own paper “Stress, nitrogen, survival and abundance of herbivorous invertebrates”. 1981.

3.3 Typed and handwritten research notes on competition, drought, food and animal population regulation. Includes White’s “Thoughts on population regulation” and V.C. Wynne-Edwards “Comments on a paper: Population control in animals” and “Hypothesis of control of Abundance by group behaviour”. 1964-1978

3.6 Map of New Zealand’s North Island (Te Ika-A-Maui), plus six survey mark sketches (on tracing paper) which can be overlaid on the map for a clear picture of the termite survey results. Undated.

1. B/w photograph inscribed on reverse by White: “Front steps of Waite Institute. Postgraduate students from overseas with Colin Jenner (far left back row next to me) & the Director Jim Melville (in front of me)...”, ca 1962-63.

7a. Set of 24 photographs taken in Beijing, mostly of White, Cheng, Li, Ma and Wu. Brief inscriptions on reverse. 1984.

12. Specimen and landscape photographs, mostly undated with no descriptions to reverse.

13. Series of photographs (many original and annotated) and some negatives used in White’s 2005 book ‘Bush Boy to Bug Man: the making of a Forest Entomologist’, catalogued for the University Collection (595.7092 W5885b). Photographs have been left in the envelopes as arranged by White according to book chapter (some chapters missing).  Miscellaneous photos, (left loose by White), have been filed in the last album sleeve.

See also: Series 7.8 Photographs (Research-related) for items on lerps in South Australia. Received as additions in 2016.

The following Series 5-8 were received as additions to Thomas White's collection in September 2016.  Contents have been listed according to the original order of the boxed material.  For more detail, particularly with regard to Series 8: Correspondence, please contact Rare Books & Manuscripts.

Folder 4
“Todd’s Crossing” Lerp sampling counts.  “Cardiaspina densitexta on Eucalyptus fasciculosa”.  Though handwritten, content appears to be a duplicate of the (also) handwritten data in folders 1-3.  All items kept in situ.

White organised much of his research data on Eucalyptus fasciculosa (Pink Gum) by date.  All content below remains in situ.

1962-1970
Maps and road guides, plus handwritten notes on Eucalyptus fasciculosa in the south-east of South Australia. 1 folder.

Small collection South Australian and New Zealand road and forest maps as used by White during his sampling research. Undated.

Letters, maps and data mostly related to rainfall in South Australia. Also, some correspondence on previous lerp outbreaks on Pink Gums in the South East of SA. 1963-1971. 1 folder.

Substantial collection of photographs related to White’s research, mostly on lerps in South Australia. All items left in situ. Descriptions below are those as written on the packet/envelope. 2 folders.

Two archive boxes of unsorted correspondence, received in 2016 as additions to White's collection.